As I was making my way back from church yesterday, I took the opportunity to photograph two examples of what I term "unfinished business" in our city's pedestrian/cycling infrastructure. They occur at the ends of a main North-South path (built at great expense) running through the middle of town. In addition to marring a fine project, they each underscore in miniature the problems facing non-auto transportation in our town and society.

The first example marks the South end of the pathway. Here, a city street, railway, sidewalk, and the pathway all come together (admittedly, a complicated situation). The pathway ends abruptly in ballast rock. The curb is cut, allowing for one to ride from the street (after negotiating the tracks nearby) onto the pathway, but the ballast rock is pretty treacherous for anything other than a mountain bike. Since this pathway is very much built for both pedestrians and cyclists (the bike lane on the street parallel to the pathway ends where the path begins), this awkward transition makes no sense. For pedestrians, it would be like separating segments of sidewalk with a few feet of swamp. Some sort of fix is needed, preferably one that directed bike use of the pathway away from the grade crossing a bit.

The second example comes from the northern terminus of the same pathway. Here, the transition from pathway to parking lot is marked by a large swinging gate. This is here, obviously, to keep motorists from entering the pathway (this section of the path is not normally open to cars). The practical result is to discourage cycling use, as the space allotted for cyclists to pass through the gate is fairly narrow. While I myself don't have much trouble with it, a moment's inattention could lead to an exciting dismount. This gateway poses a real—but entirely avoidable—hazard. A better solution would be to create an opening wide enough for comfortable simultaneous cycling and pedestrian use, but still too narrow for a car.

All of this sounds pretty whiney, if one sees the car as the only significant form of transportation. I manage both of these small hazards fine most days. But I also know that I’m pretty used to this sort of thing and not easily discouraged. Neither of these examples, translated to city streets, would be tolerated. A solution for each is likely doable, and for not a great deal of money. For that to happen, they need to show up on the community’s radar-screen as the unfinished business they are.

Community, Personhood, and the Bike Boulevard 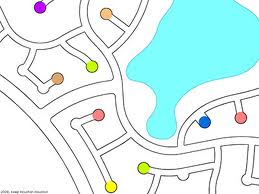 When members of our parish are asked what means the most to them about our church, one of the top words is always "community." So many pressures and conveniences today seem to be driving us into isolation, but the human being requires community in order to become a person in the full sense of the word. Thus, when people find it, they value it. Part of real leadership today is to help people see these pressures toward isolation (with their associated "conveniences"), name them, understand their full impact, and then make appropriate changes where needed.

For years the ideal neighborhood in much of the USA seemed to be found in suburbia. Even in mid-sized towns like the one I live in, new neighborhoods have been built to resemble distant suburban environments, with loop-and-lollypop street plans that make the automobile about the only practical transportation tool, a plasticized sameness of architecture, and mini strip-malls selling boring/unhealthy products placed far away from homes but near major roads. It reinforced a common mindset of escape-the-city, was unimaginative, but sold lots of homes—and lots of gasoline.

Today, though, there is a new attitude towards desirable living conditions. Being near the downtown core is good. Walking or biking to work or a meal or other activity is attractive. Being stuck out in a cookie-cutter funny-farm of pseudo-craftsman or bogus-Mediterranean villas feels silly. Spending money on a second car (or, in some places, any car) is outside the budget. Add to these points the relationship we are beginning to want with the environment and Creation, and the "drill-baby-drill" mentality of the 20th century along with its concept of the ideal neighborhood begins to look not only unsustainable but grotesque.

Beyond this, community is becoming attractive. Before the twentieth century, most people lived very communal lives, either as part of farming communities or in urban areas. This was normal and maintainable. Suburbia, with its promise of “little king consumerism” was, it turned out, the unsustainable newcomer to the human living pattern—and it had also become a big bore.

As we move into a new kind of “good life,” things like community are mattering in ways they haven’t for a long time. Cycling is part of this. People who cycle as a main transportation form (as opposed to purely leisure or sport cycling) tend to like less auto-dominated streets. To encourage more cycling, some cities have created bike boulevards or greenways that promote a safer, quieter, bike-friendly environment.

Those same streets become more desirable because they are quieter, more livable in the way we like things to be now. Housing values go up. Neighborhoods that were once neglected are gradually transformed. Streets that had no aesthetic appeal receive improvements that bring in beauty and tranquility. Communities are being renewed because someone in local government had the foresight and the courage to read the tea leaves of contemporary America and put in a series of bike boulevards connecting neighborhoods to the core.

The early phases of this process are sometimes marked with miss-steps, heady idealism, and some stiff resistance…but as we see what the results are in one community after another, it becomes clear that the future includes a strong emphasis on exactly this sort of accommodation for people-oriented environment.

Upright bicycles are creatures of the bike boulevard mentality, really. They are not fast. They aren’t made for sport. They are entirely utilitarian and encourage one to take stock of the surroundings. I see such cycling and the culture that supports it as part of a much deeper trend: a move away from isolation towards community and true personhood in our society, and I delight in it.

This video gives some idea of how cycling and pedestrian accommodation can help create the conditions for such community to exist.

Email ThisBlogThis!Share to TwitterShare to FacebookShare to Pinterest
Labels: A Cycling Sensibility, Spirituality in Cycling


Among the varied pleasures of regular urban cycling is the unexpected encounter with flowers. Oh, one gets plenty of other smells over the course of a year, but the calendar of flowers and their scents is by far the best.

For me it starts with Daphne. That intense, sweet, simply-amazing-given-the-time-of-year scent that wafts down the street, catching the early spring cyclist by surprise: it remains sudden and fresh and new no matter how many times I experience it.

As the months pass from Daphne-break a succession of new flowers bud and bloom in their turn, creating invisible clouds of encouragement when the sun is warm, the traffic nasty, or the hills seem steeper. As summer comes to its mellow conclusion, there finally comes the rich attar of Rose, seeming to color the air itself as it blows from the city’s rose garden across my path home.

Even though this procession of flowers, their colors and scents, is bound by time, the experience of cycling amongst them is timeless. Like so much I experience on a bike, it makes me glad for the whole person, the whole experience of life. In a car I am frequently concerned only with “getting there.” Upright on my slow Dutch bike, I enjoy the meaning of the journey itself.
Posted by B+ at 5:13 PM No comments:

The Potential for Human-Scaled Cities

The city I live in is a pretty good example of a situation many Americans face today: remnants of earlier livability rendered islands by moats of mechanized tyranny. Let me explain what I mean.

Many neighborhoods in our town were built prior to the complete dominance of automobiles. That meant that streets were essentially there to serve residences (of various descriptions), offices, churches, parks, shops, etc., rather than to provide high-speed throughways for cars. Over time, though, the auto-as-victor approach to thinking about towns and cities meant much beefier sorts of streets—looking like mini-freeways at times—were punched through the heart of towns and neighborhoods in order to “move traffic” through. Just about every street needed to present its speed-conscious credentials. These mock-major streets increasingly functioned as a sort of moat, making foot and cycle traffic seem much less desirable. The message that remained was simple: drive.
And drive we do. For distances that make no real sense when viewed from the safety of a map, we drive to places that should be easy walks or bikes. When experienced at the street level, though, it makes sense. The visual, auditory, and experiential cues all encourage one to choose the quiet, comfort, and safety of a car rather than the inconvenience and obvious second-class-citizen condition of a non-driver for these short hops. This, in turn, feeds many forms of social, physical, and (I would say) spiritual illness in our nation.
Cycling in our town can be quite pleasant in some neighborhoods—those still functioning on the human scale. But navigating the downtown core, for instance, is pretty tricky. It is instantly evident that, in spite of some sharrows, the downtown streets are mostly speedways designed for a false sense of efficiency (I drive these streets as well, and they are often quite clogged, in spite of the Indy 500 one-way grid treatment). I have learned a few tricks here and there, and developed some cunning ways to avoid the worst, but the message is still clear: drive.
Now, in our part of the world driving is often a far more enjoyable thing to do during the long rainy months (though I am quite surprised just how many enjoyable, dry days as a cyclist one actually can get here in the winter), but neighborhoods and downtowns designed with cycling and pedestrian concerns in mind are much more than “multi-modal” transportation tools: they are about reversing the many ill effects of that mechanical tyranny I spoke of earlier.
When I visit towns or cities that have put multi-modal transport in the mix, I note how much more human, enjoyable, attractive, and just plain interesting they are. I note that people form more of a personal relationship with their town, their neighborhood. When the emphasis moves from “just driving through it to get where you want” to “caring about it because it is part of your life,” everything changes. The pace, the level of attractiveness, the commitment to maintaining it—it all starts to matter. There are already pieces of this picture in our town, but what is missing, it seems to me, is "the bigger picture" of a basic commitment to putting the scale back to the person, not the car.
Cycling is not the solution to all of life’s ills. Some bike blogs get a little carried away with this. But, cycling is part of a much larger cultural renaissance, wherein people begin to matter more than machines and the anonymous culture of indifference that produces those machines. This is something I find hopeful, and one more reason to keep riding, noticing, and helping move the conversation towards a livability both old and new.
Posted by B+ at 11:45 AM No comments: