Signs of the Times

I have a penchant for taking pictures of signs…especially strange or ironic ones. I’ve done this for years and derive a kind of mild pleasure reviewing them from time to time. The small follies of human attempt to govern, inform, or control provide a gentle reminder of how fragile our grip on things really is.

So, here are some pictures (mostly in Salem) I have taken of signs that stuck out…

When we moved back to Salem some years back, we discovered what is surely one of the odder signs in town while walking around Waterfront Park. This sculpture, placed just outside the Carousel building, appears (at first glance) to be an open invitation to children (and others) for a photo-op. But, no! Even though cushioned rubber matting has been thoughtfully applied beneath it (perhaps at the suggestion of a nervous city lawyer or risk manager?), this horse is most definitely off limits to passengers. As the sign observes, this is not a piece of play equipment. No, siree. If the saddle’s patina is worn to a luminous polish from the many folks who didn’t read the sign, that’s not the fault of the City. Nope.

#2: Just What Sort of Business? 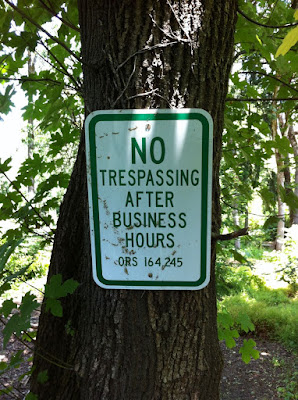 This sign is just off the Church Street Bridge over Shelton Ditch/Pringle Creek, down in a grove of trees by the creek side. There must have been a perfectly logical reason for this sign (perhaps someone could illuminate me?), but having this sign in such a setting begs the questions: “What business?” and “What hours?” It also suggests (at least to me) that trespassing during business hours is just fine... 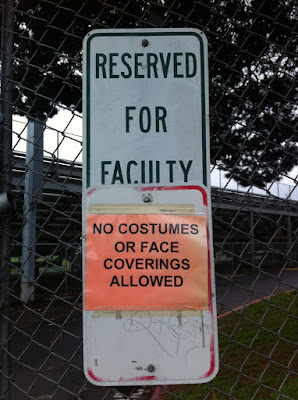 Schools like South Salem High have many parking headaches, but this sign suggests a persistent problem with something I had never before considered… 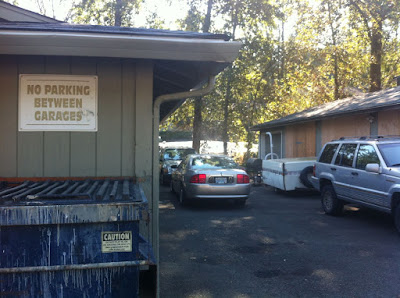 This sign’s command, silently thundered day and night, is constantly ignored by the tenants.

#5: Be Kind to Your Amphibious Friends 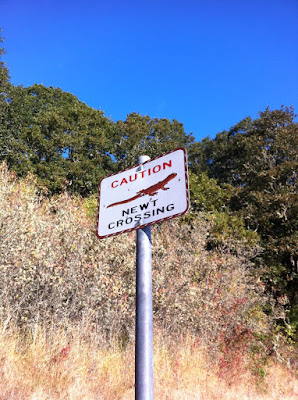 While riding in Corvallis, Oregon a few years back, I came upon this thoughtful warning about an apparently common problem there. I will tell you that no newts were injured to make this blog post.

These two photos show a change of mind about how to treat the bike lane on one of Salem’s more bike-trafficked roads (Winter Street) during the Hospital’s long stretch of construction a while back. The first picture shows the once-common view that “something has happened to your bike lane, so deal with it.” The latter suggests that bikes and autos both have a place on the road and caution for everyone would be a good idea. This is one place where cyclists in town should express appreciation…and keep up the pressure. 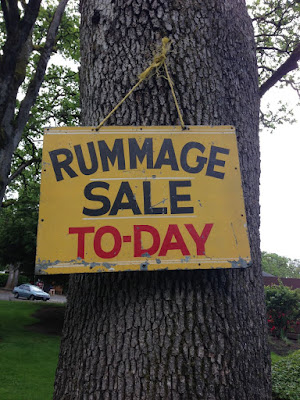 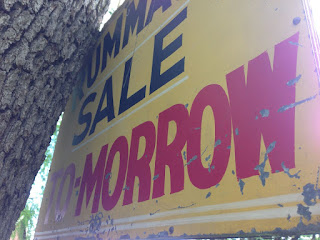 For many years, when St. Paul’s Episcopal Church had its rummage sales this sign was placed on an oak tree near High Street. It looks to date back to the gracious, spacious time when “today” was still hyphenated (at least by the well-heeled) as “to-day.” The reverse of the sign shows the admirable quality of consistency in its spelling of “to-morrow.” I haven’t seen this sign out recently and hope it has not been trashed, as it harkens to a less anxious era…something I find comforting just now. 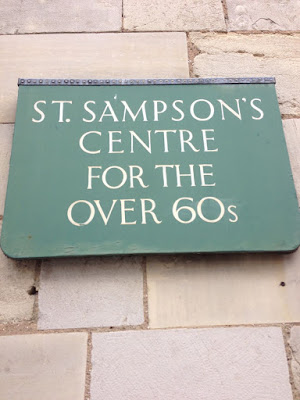 I took this picture whilst in York, England. In Salem, we call it the “Center 50+,” making it seem oh so sexy and active. But in York, there is a kind of English sobriety and dignity about the facility I find a lot more attractive. I also like the dedication to St. Sampson...something distinctly uncommon on this side of the Pond. 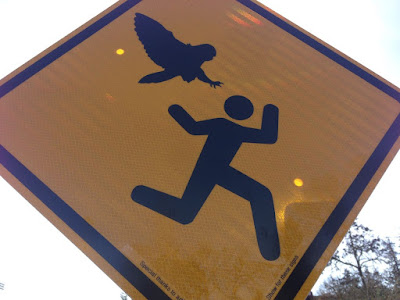 Of course, how could I omit Salem’s greatest sign? I even know one of the people whose experience of “interaction” with Owl Capone gave rise to this graphic. I still think people should try wearing a helmet while passing through Bush Park in the spring…perhaps some could be hung on pegs under each sign? 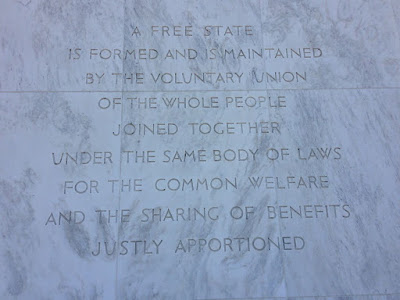 This inscription on the north face of the State Capitol building is extremely appropriate for the current election cycle. The irony that it was inscribed on a building in a time and place that had a very, very uneven record of living up to its ideals in no way mitigates the fundamental import of what it says to every era and nation.

#11: A Reminder of the Dangers of Literalism 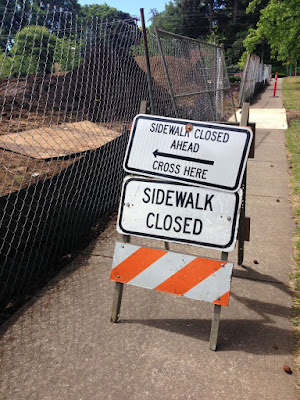 This is the sign that made me think about writing this post. I saw it while out today. It suggests either expedience or a singular lack of insight. In any event, it was momentarily entertaining.

#13: A Tale of Two Bumper Stickers

Our family likes Salem a great deal, but some gentle ribbing is good for people and organizations. Many people are familiar with the “Keep Portland Weird” mantra, but an enterprising fellow in town had some “Keep Salem Lame” bumper stickers printed up a few years back, and my wife and I sought high and low how to get one. On a morning walk happened upon the creator of this gem, and he proved willing to part with one—if we promised to put it on our car.

Some time later while in Portland we parked just behind a car with the famous Portland Credo and we decided to take a picture of both sentiments.

Far from denigrating Salem, our purpose in sporting this bumper sticker is quite genuine: we are happy to keep Salem different from Portland (a place with an increasing number of unsavory problems in spite of all the hopelessly goofy press); if that makes us “lame,” so be it. We’ll take some lameness over much of the weirdness, thank you very much. Diversity is good, right?
Posted by B+ at 4:51 PM 1 comment: