Putting a Price Tag on Everything

I was recently cycling from church back home through Bush Park. Going along slowly as I do, there a plenty of opportunities to see interesting things along the way. As I started to pass by the Bush Barn Art Center, I came upon this scene: 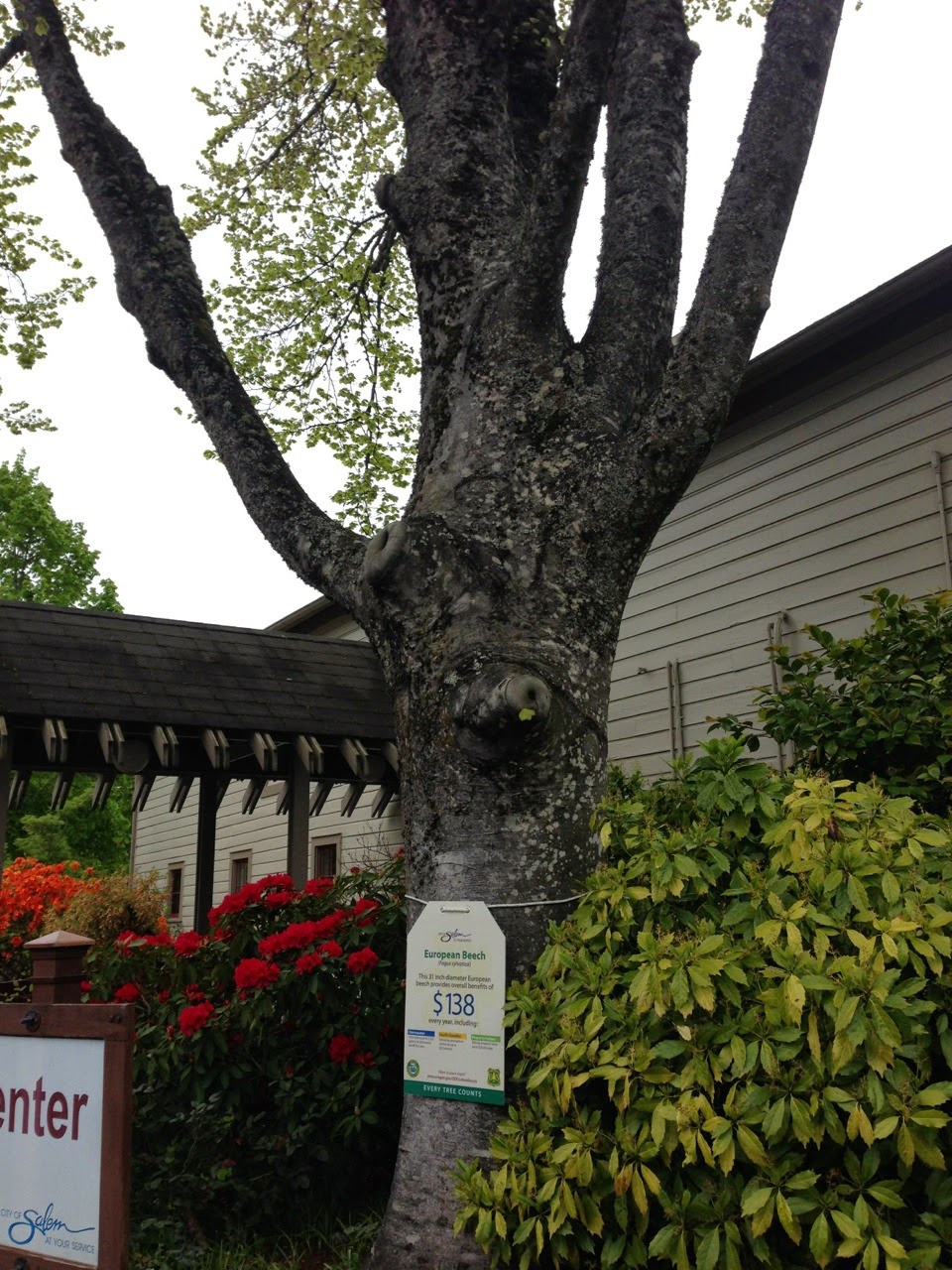 In an effort to put a monetary value on a tree, a large price-tag was tied around the trunk, complete with explanatory text. It was all very nicely done and made its point quite effectively. 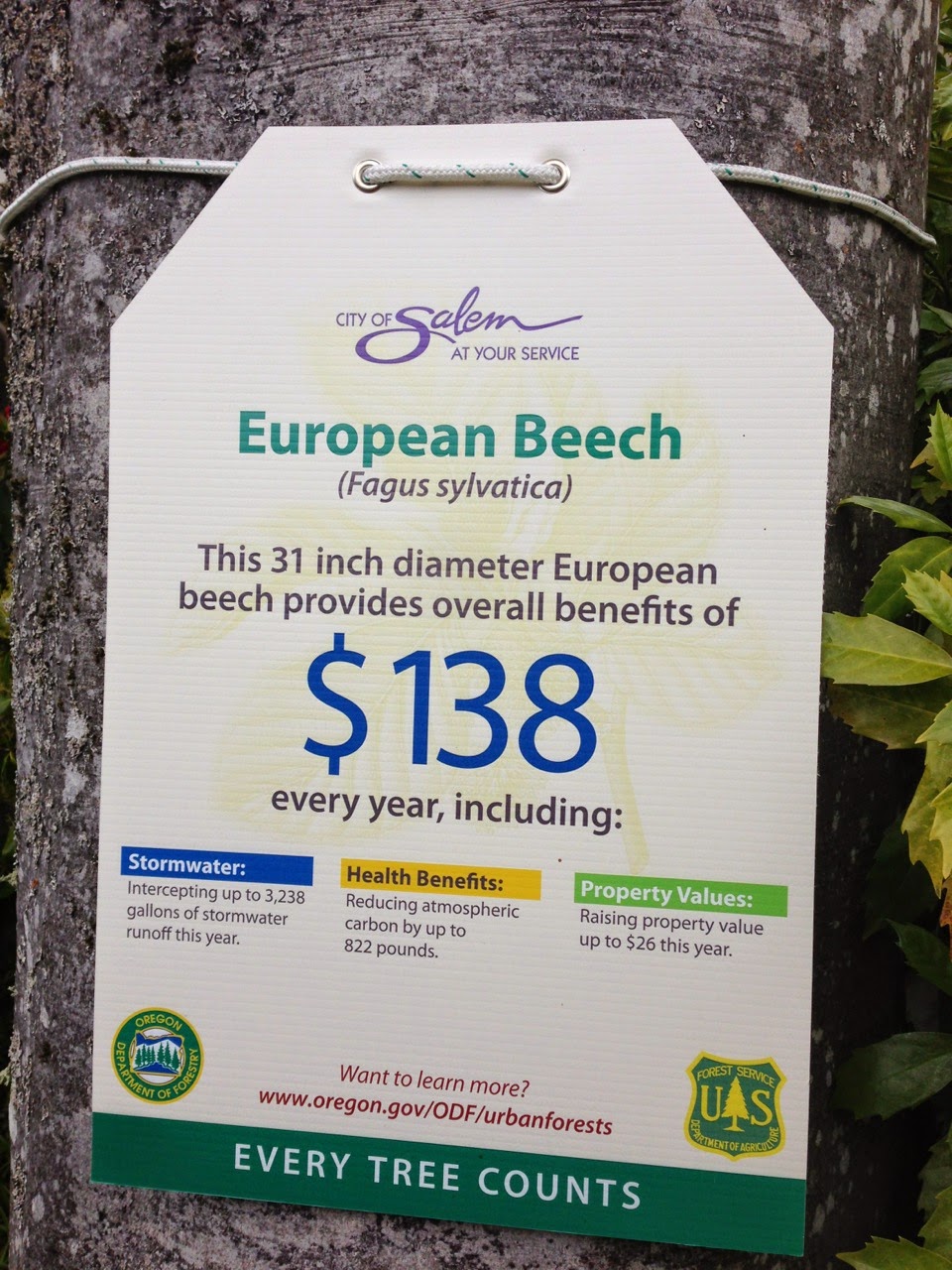 The project has obvious merits and I cannot fault any of the specifics. I later followed the suggested web link to a nice web site that had all sorts of information about trees and their impact on urban environments. Yet, somehow, I felt a surge of frustration in reading it. Perhaps it was that dollar sign on the tag.

Over the years, the need to justify everything in terms of monetary value has become intense. There is hardly a single moment in life that we cannot somehow trace back to a cost or a pecuniary benefit. Being "monetized" is our way of life now. We have become "made of money," as my mother used to say about some avaricious people.

In general, I very much like trees. The sound of wind through tree branches, or the cool air under a spreading oak on a hot summer day delight me. The way an old tree has absorbed the eras during which it has lived, or quietly presided over years of change intrigues me. The effect of lots of warm wood in a home or church building or other interior connects me with earth and sky and seasons. I grew up in this part of the nation; trees and wood are part of what defines life and landscape.

There are times when trees must be cut down, and there are times when trees should be saved. Economic factors, of course, play into these decisions. (though it does seem that the calculations can be "adjusted" in fairly creative ways to get desired results). I am not a "tree-hugger" in the romantic sense, nor am I a "mow 'em down" pro-development zealot. I prefer to look at the whole, trying to bring about and preserve a certain balance in the lived environment between change and continuity. The trick is in how to make judgments.

The problem with the approach to understanding trees (or other things) taken in this instance is that it is a furtherance of the old story in America: Creation has meaning to the extent that we can measure and put a money value on it.

I think about this sign and then I think about my time at an Indian Reservation and talking with members of the tribal community there about their relationship to nature. A discussion got going about the recent stealing of some huckleberry plants from native lands by non-Indians. In addition to the fact that crimes of trespass and theft had occurred, a much more serious matter was brought up: the huckleberry plants form a "tribe," just as "alive" and valid as the human population. Together with the salmon, the rocks, the forests, the deer, and all the other "nations" which shared the Creation with the resident tribes, the "huckleberry tribe" had a sacredness that needed to be honored, not ripped willy-nilly from the earth for monetary gain. In this logic, if it can happen to huckleberries, why not people? American Indians know that story all too well.

I found much the same thing in Ireland, where freeway expansion plans often were at odds with sacred groves of trees. Frustrating to modernity and efficiency, yes; but a counter to the view that the ends justify the means at all costs, especially those without a dollar sign attached to them.

Now, I am not suggesting we all adopt an indigenous viewpoint on trees, rocks, or nature. Instead, I am advocating an alternate, or perhaps and additional approach to the discussion--one that will prove both more equitable and more inspirational over time.  I think it both a kind of spiritual and intellectual poverty to teach and practice a way of life where monetary value is the final, highest, and essentially only way to "value" something.

I think we should begin by viewing a tree not as the sum of its financial benefits or its utility or inconvenience to us but as a presence, a part of the whole that has benefits far beyond what can be measured in terms of gallons, pounds, or dollars. These tools for measurement have their place, and I am not against their use; but only in conjunction with other ways of valuing, other approaches to meaning. A "both-and" approach would be ideal.

Perhaps, in addition to the monetary and scientistic information provided on the tag, a passage from an appropriate poem or lyric should be provided--just something to say that this tree is more than a price or a tool for our benefit. As it stands, this campaign seems to me to reinforce a rather sinister aspect of our cultural inheritance: that of extractive self-justification.

Whenever we look at the Creation primarily through the lens of what it does for us, we are essentially following in the footsteps of the extractive colonists who came before us...and who left such a legacy of destruction and spiritual impoverishment behind them. We are liable to repeat their folly in unintended ways because we are still using their thinking, albeit in a different manner.

So, while I am hardly up in arms about this little reminder of our cultural impoverishment, I do feel it is worth taking up a "minority report" about its assumptions and aspirations. I would suggest that it what is needed is a dose of people like John Muir or Wendell Berry, in addition to (and really above) all the numerical arguments. Only a deeper reason for trees, streams, meadows, ecosystems, and ultimately people, will stand up to the ever-shifting and greedy rationales of those who play with numbers to justify their goals.

Otherwise, someday we are each going to be required to don such tags ourselves. I just hope my tag--and yours--will indicate we are enough of a benefit to keep around.
Posted by B+ at 12:53 PM No comments: