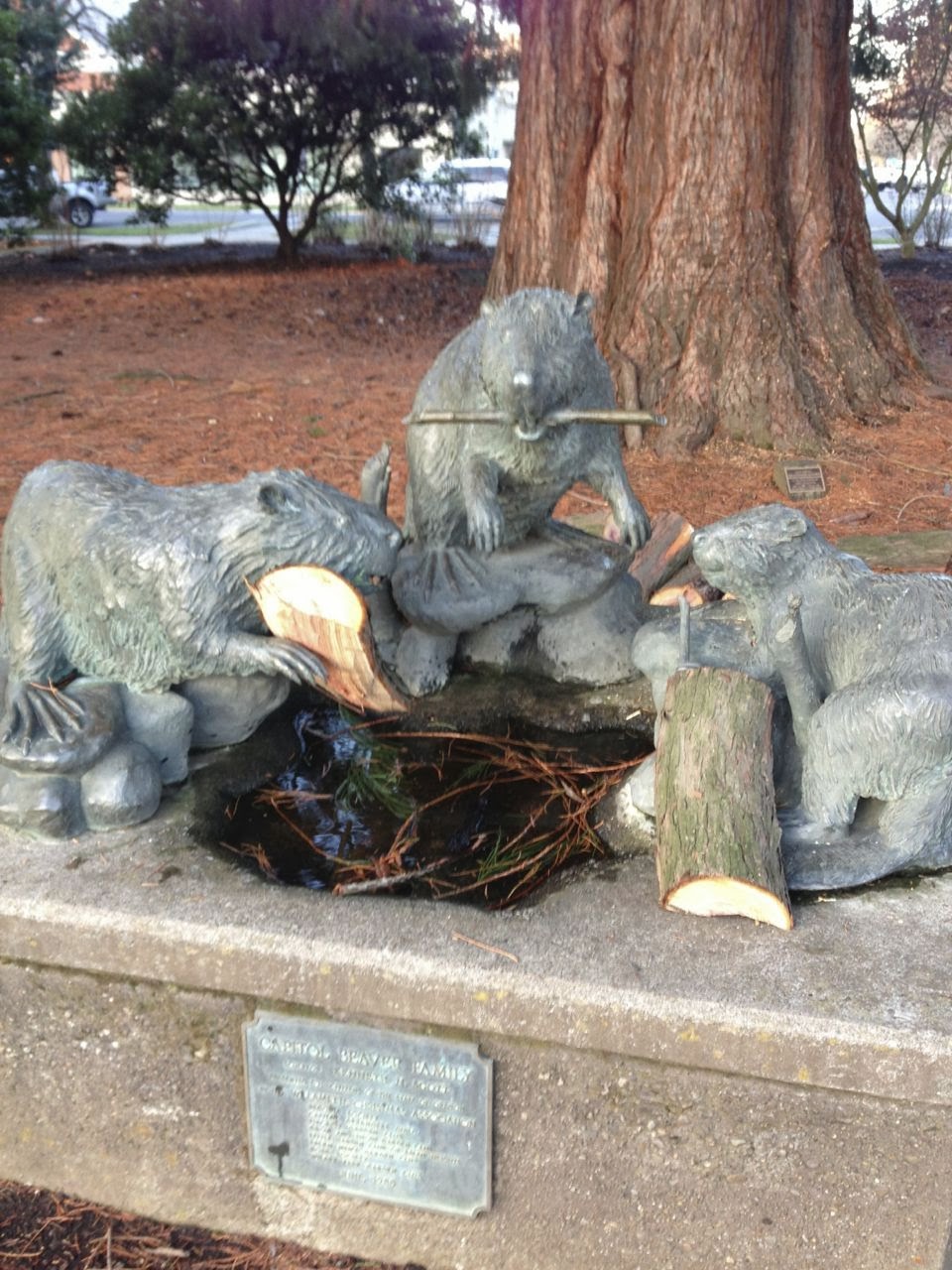 This winter in Western Oregon has been very dry…indeed, disconcertingly so. We are being warned about the dire state things could be in by this summer if "present trends continue," and thus are becoming oddly concerned with rain (a thing we usually take for granted). I remember the drought years in the 1970's here, and it looks possible that we could be in for something similar, but with a great many more people to be served and satisfied now.

Yet, while we begin to get nervous about the water situation (so much so that our church will likely soon be offering the old Prayers for Rain at the Sunday service, showing how we are still very much like our ancient ancestors in both need and fragility), there are also a few enjoyable aspects. I write these words wondering how I'll feel about them in July. Who knows?

When it is raining, one does tend to focus on getting to the journey's end. On the crisp days we have been enjoying, the eye strays a bit more, taking in things easily missed when the wet and leaden skies glower.

On the State Capitol grounds there is a statue ensemble memorializing beavers (not the college sports team…just the animal). Beavers have a lot to do with the early European colonization of this area, and not only does one appear on our state flag, but we are also often known as "The Beaver State." Better still, the real, live animal continues to thrive in many places around Oregon--for once, we didn't "love something to death."

The statue of the Oregon Beaver Family represents a sort of idealized Beaver Nuclear Family frozen forever in time, seemingly caught mid-conversation. One of them usually sports a bronze stick in its mouth to convey their association with wood. 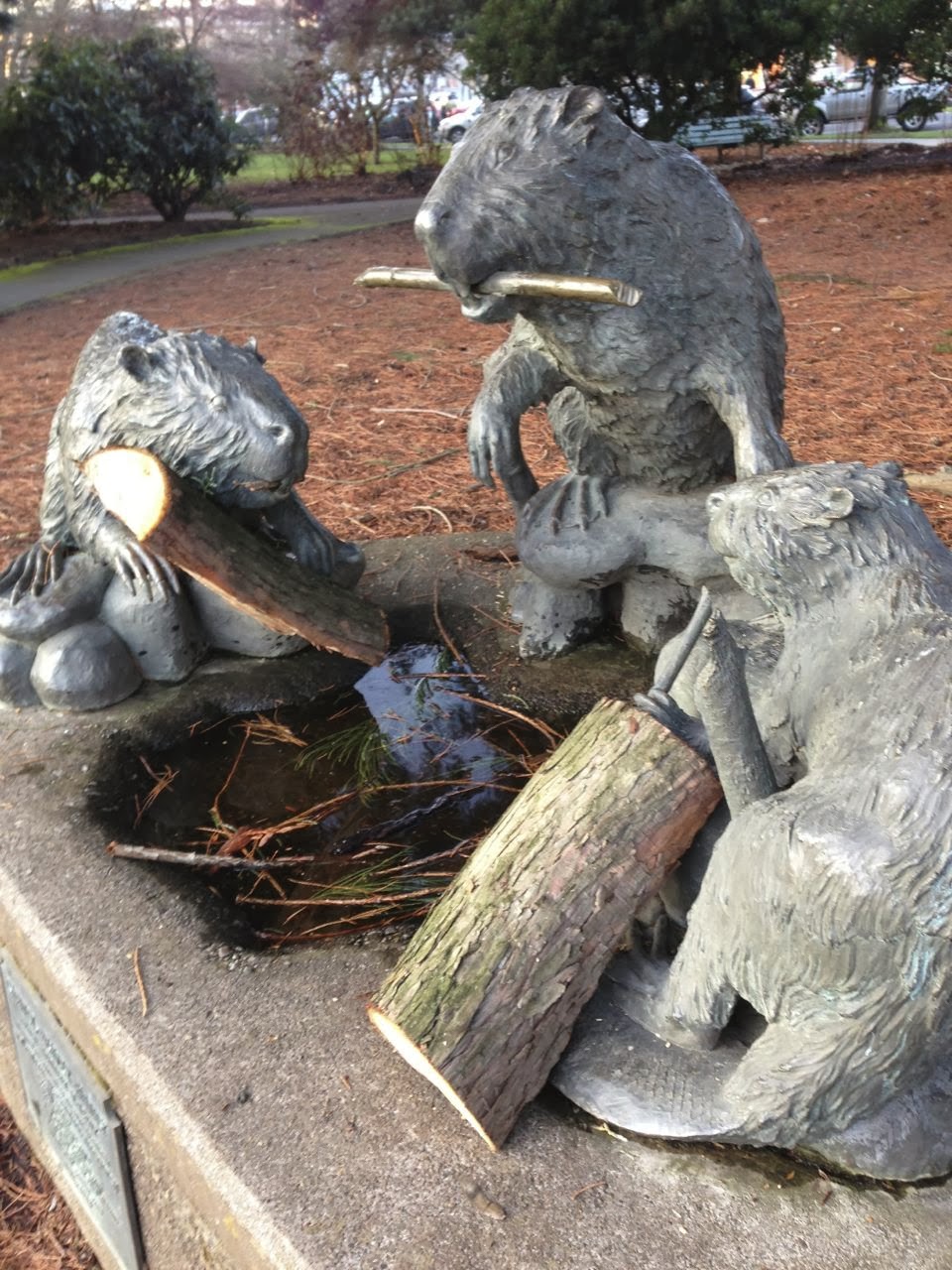 However, as I passed by one dry day recently, I noted that a thoughtful person had placed a number of pieces of firewood in the grasp of a couple of the beaver family members usually deprived of such a vivid representation of their preferred building material. It was a delicious moment of supra-realism that I savored. Here was an example of whimsical comment, rather than vandalism and destruction. The "commentator" even left a little pile of additional logs behind the statues, just in case they ran out. 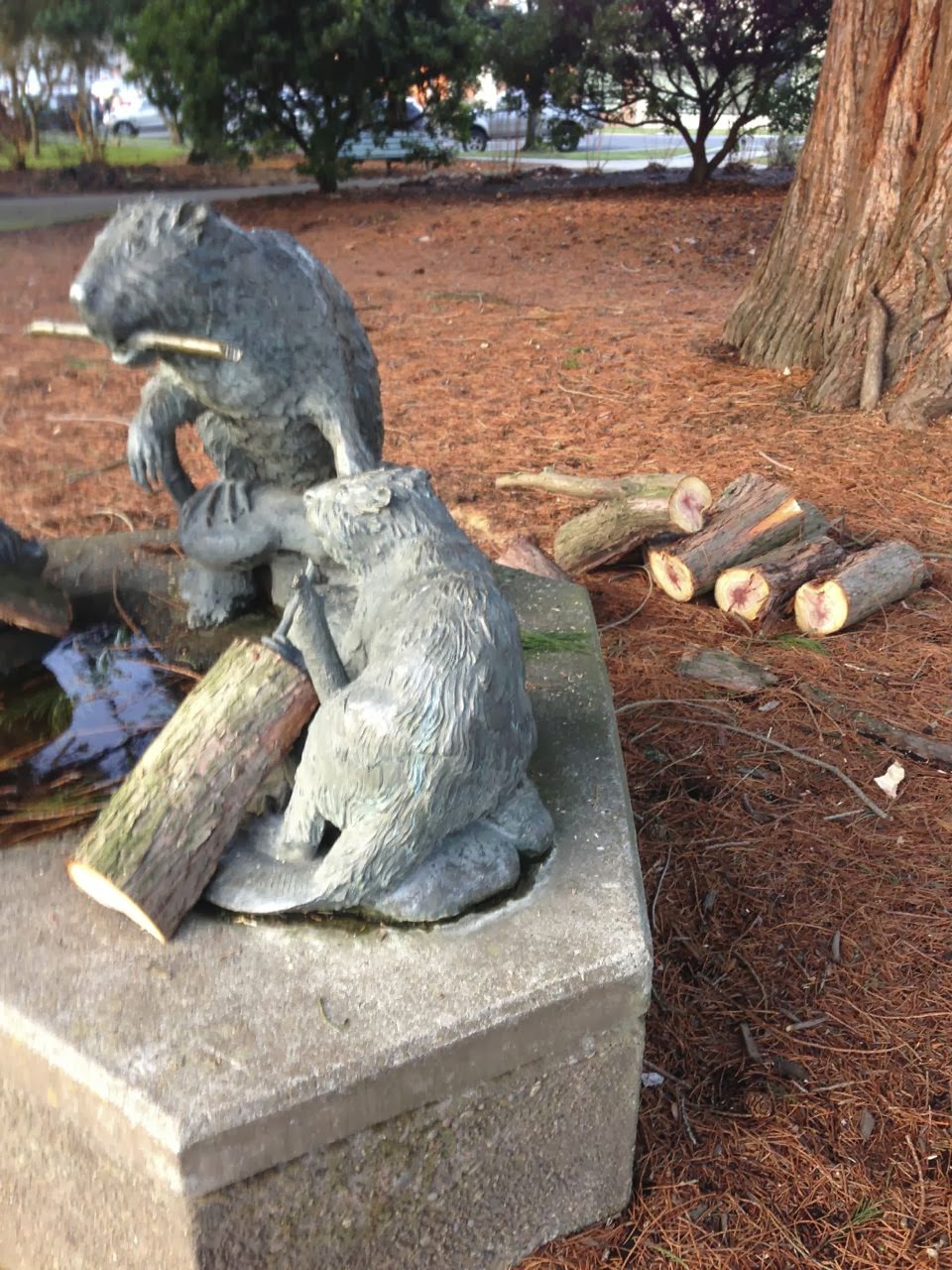 A little later on, I went by the Mill Race where it passes by the pathway nearing Church Street. The mallards (family or not, I couldn't ascertain) were busy doing what they tend to do most of the time: eating. Their jeweled plumage sparkled in the wan afternoon light, and I stopped for a moment to contemplate how extraordinarily beautiful they are. They assumed that my stopping meant I was going to feed them. So, I got on my way so as not to disappointment them overly much. 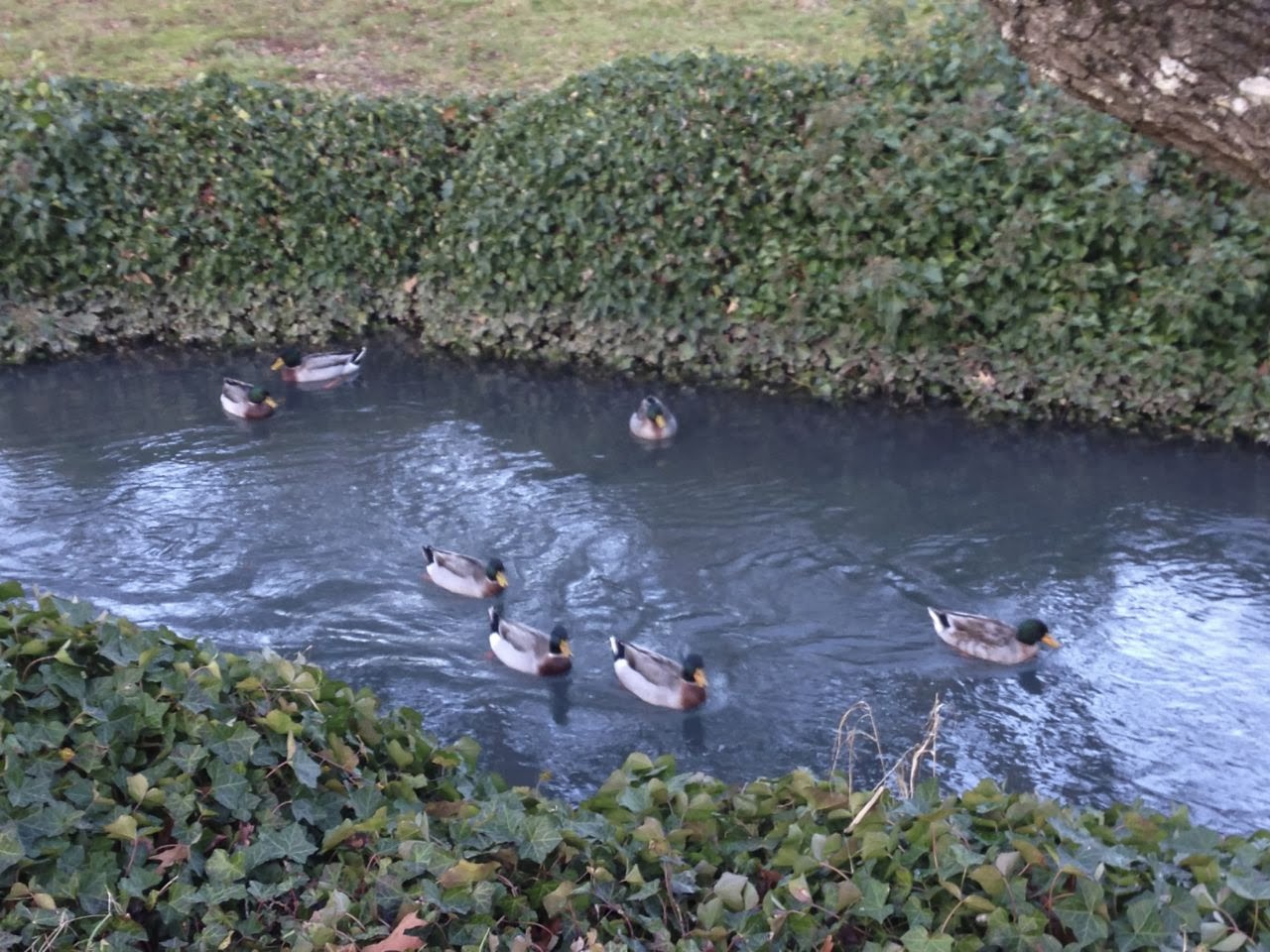 On this same journey home, I happened to meet a friend and mentor out walking his dog, and we fell into a brief but very satisfying conversation. It was just the sort of thing that makes dry days out on a bike so rewarding in a town of our size.

In advocating for biking, it is easy to get all hyped up and anxious. Perhaps that is one reason some people find cycling a bit off-putting. On my way home recently, I was simply grateful for these encounters with people, with nature, with life. There are many ways to do this, of course, but one way is to be on a bike…especially when it is a dry winter day in Oregon.
Posted by B+ at 4:41 PM 1 comment:

Bush Park Carriageway: on the wish list for next Christmas...

Now that Christmas is over (happy Epiphany, everyone!), I thought it appropriate to begin my "Salem Cycling Wish List" for the New Year. The first item on this list is an improvement to cycling in Bush Park: namely, the leg from Mission Street to the path through the west side of the park--a well-used but under-developed part of this route. 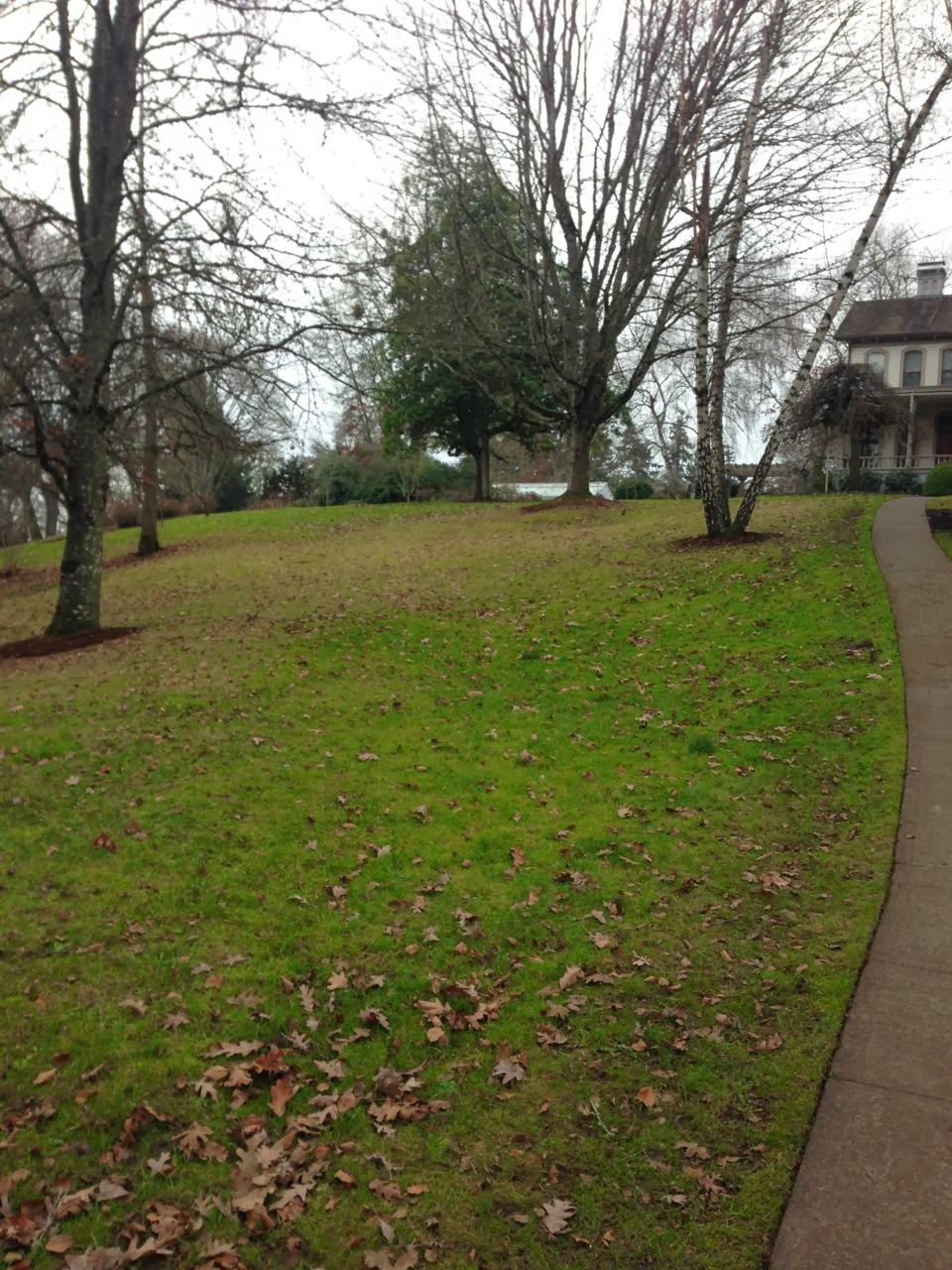 Bush House was once accessed from Mission by a carriageway. The contours of it are still visible in the grass to the left of the house, as its ghostly form climes up the hill, between the trees. 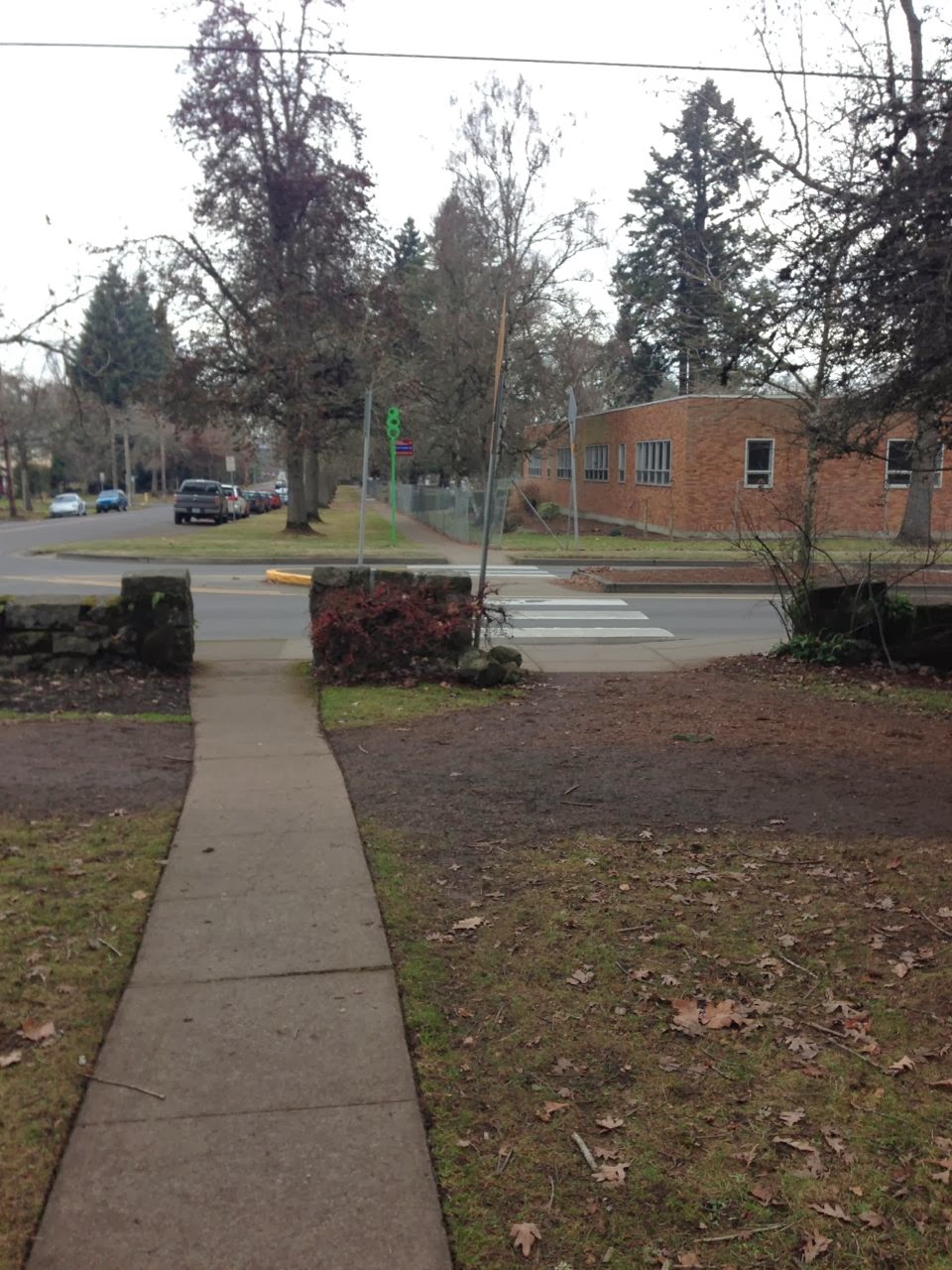 It once exited the property by the wider of the two openings in the old stone wall. Right now, both cyclists through the park and pedestrians must use the narrow cement pathway heading up the hill from Mission to Bush House. 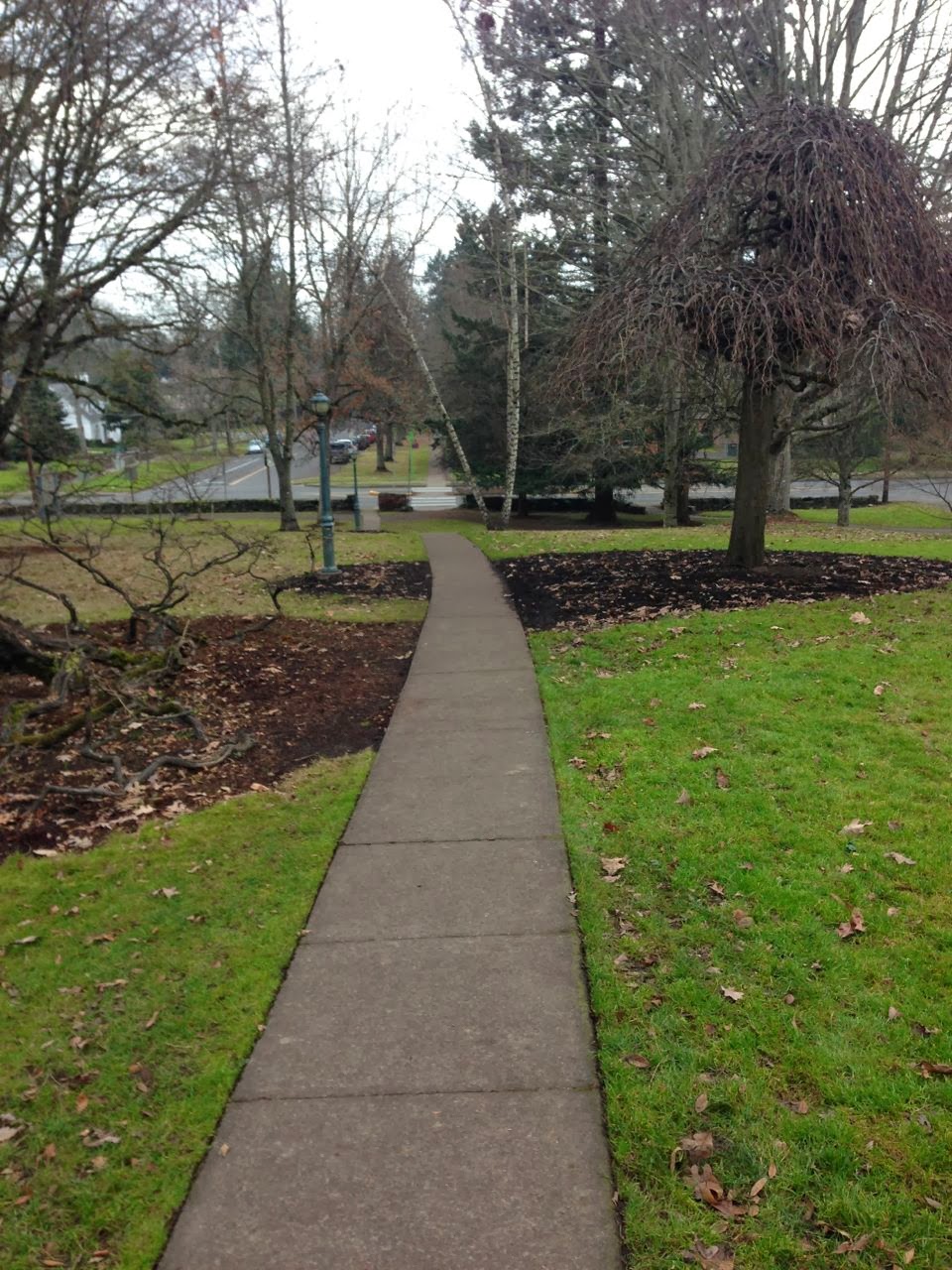 This path is not only narrow (too narrow to be shared), but steep.
Many average people would not attempt to cycle up it, even in low gear--and especially
if anyone else were in sight, for fear of hitting them. 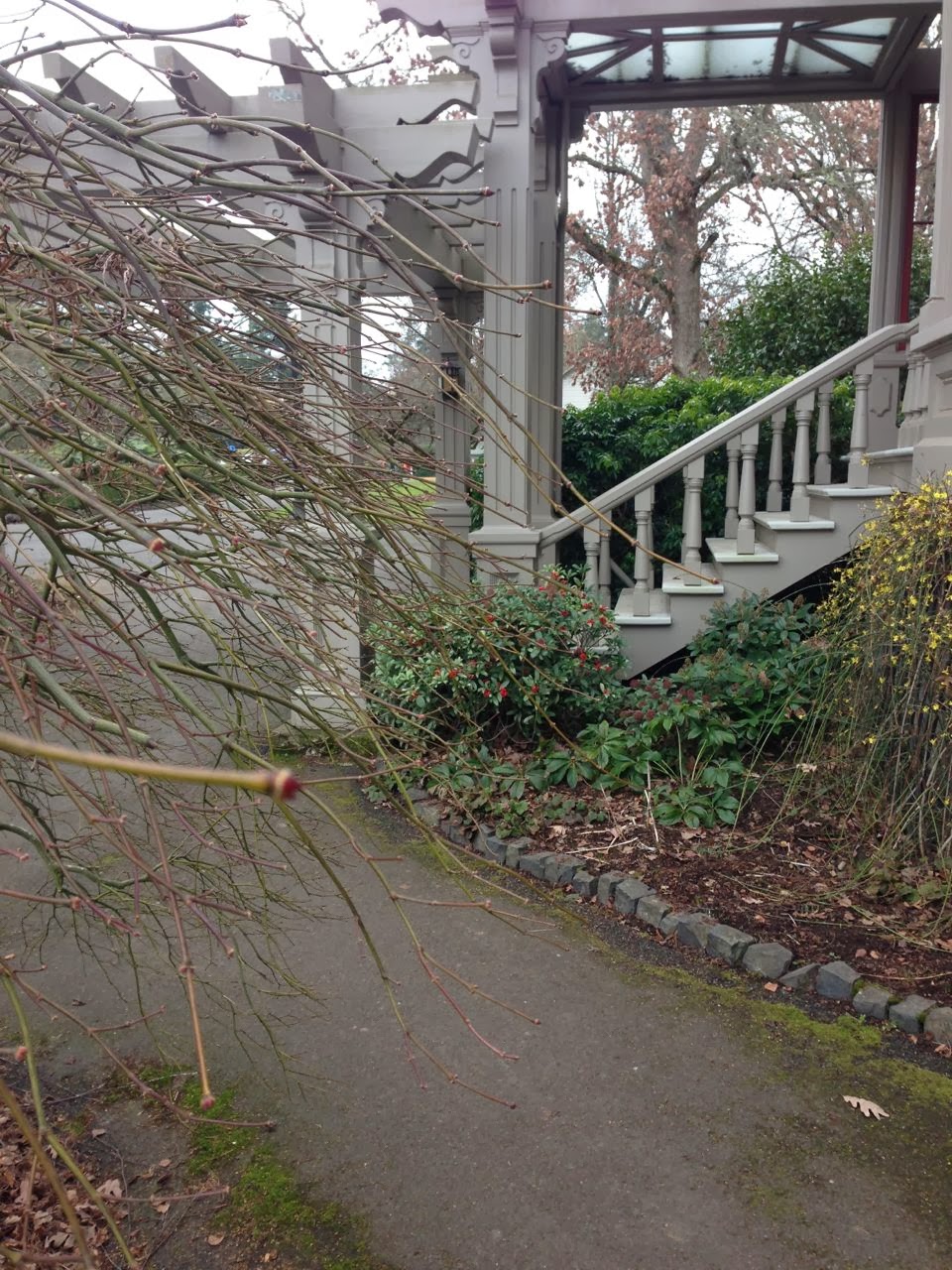 Once one rounds Bush House on this path (going around a blind corner),
one is confronted by various plants and trees, some of them reaching into the pathway.
They are lovely…but not conducive to much use of the path by more than
the occasional passer-by. This is tricky cycling. 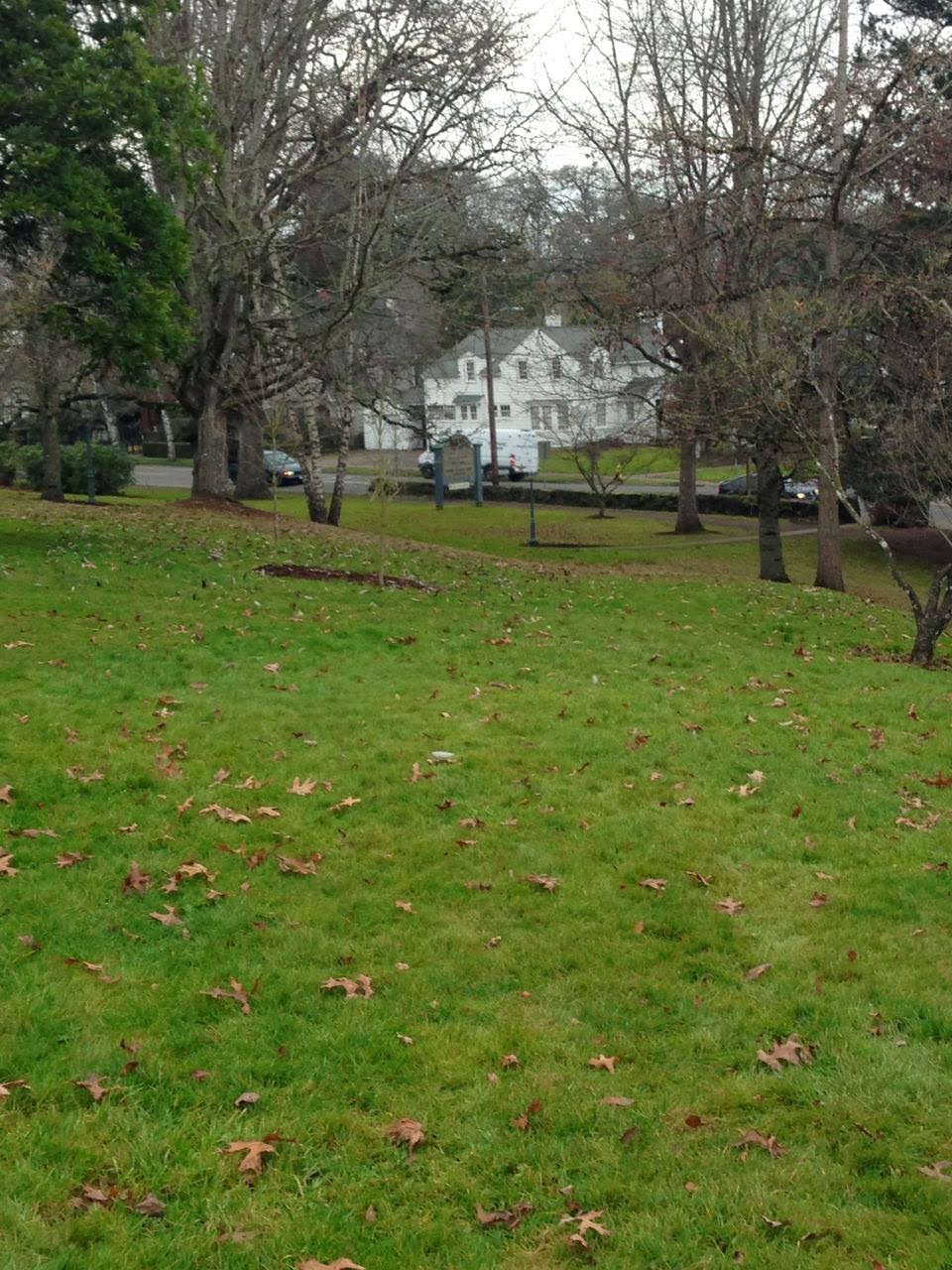 Meanwhile, the old carriageway makes its way at a more leisurely grade up the hill. 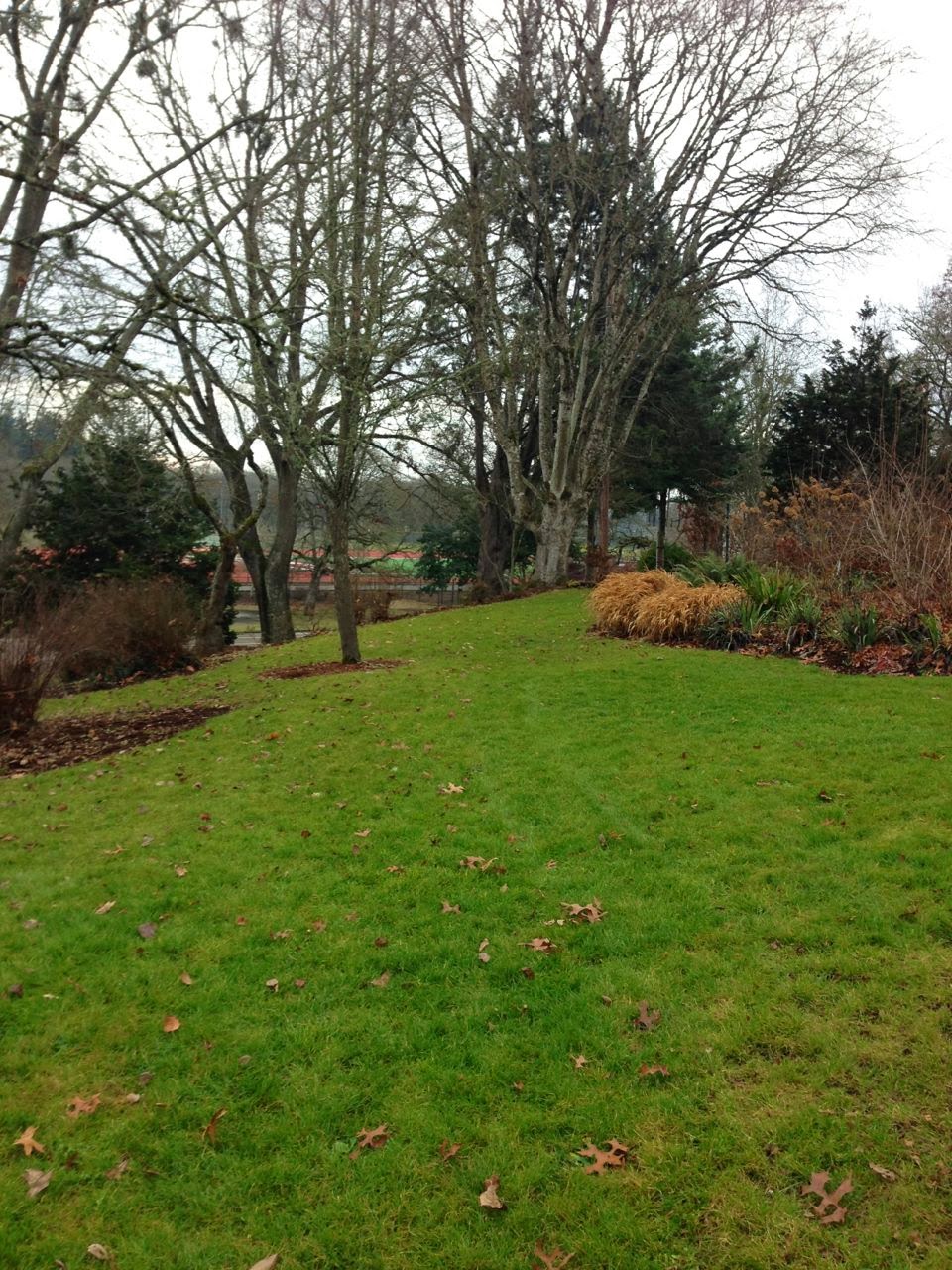 It rounds the east side of the Bush House site in a pleasant, sylvan setting. 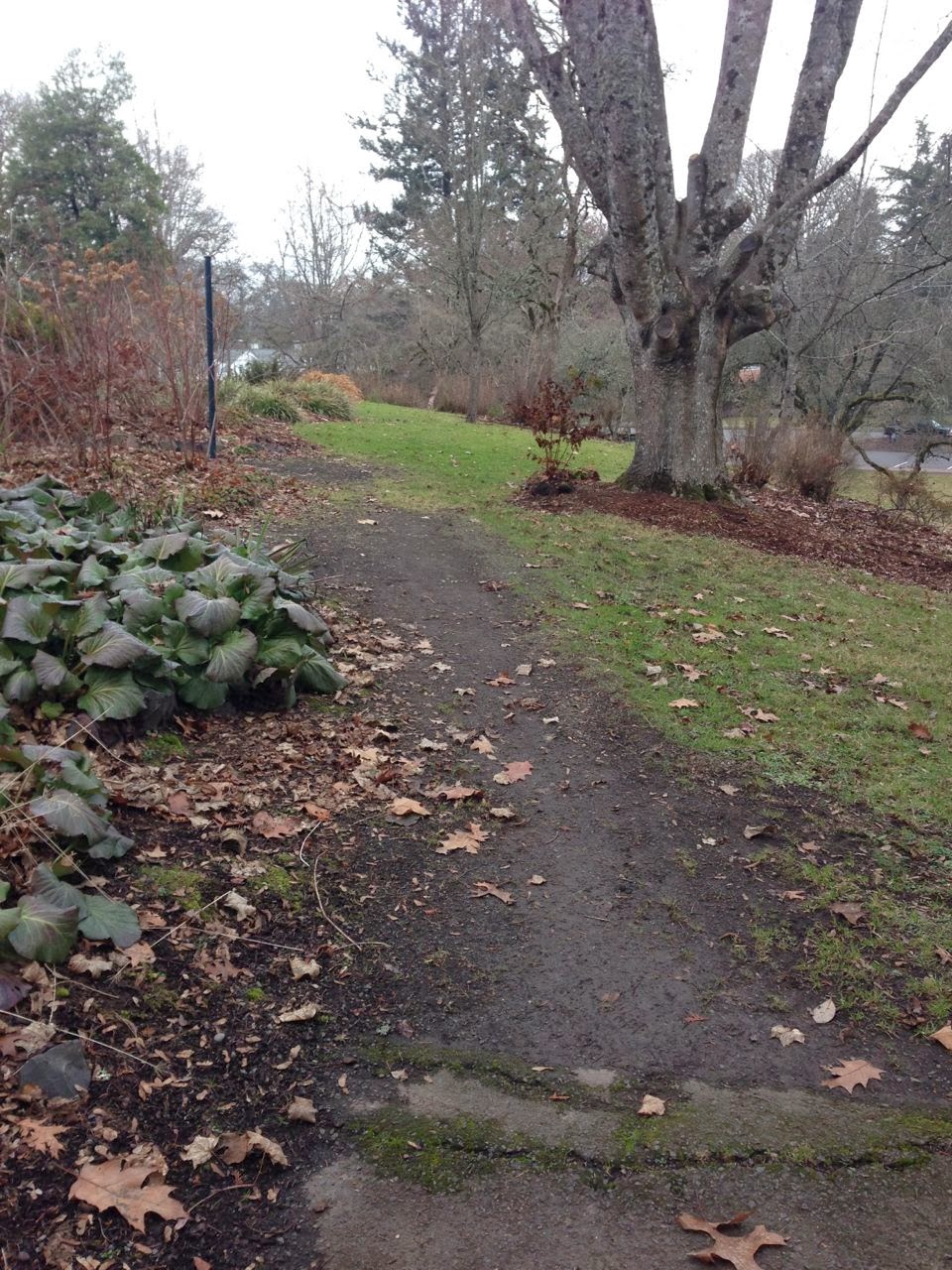 Eventually, it meets up with an existing gravel path connected to
the gardens and greenhouse there. 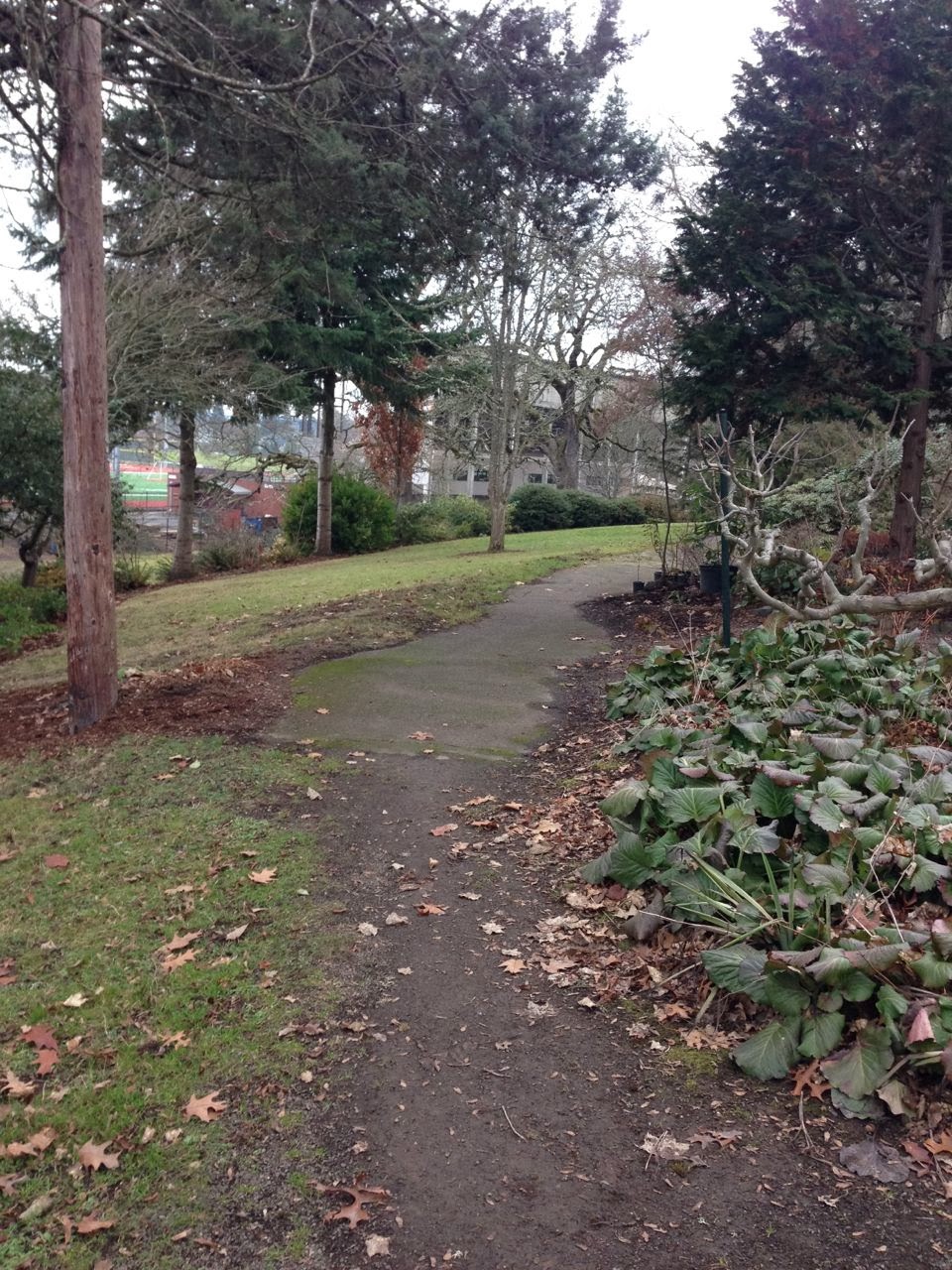 This gravel path quickly becomes a paved path, going behind the parking lot
for Bush House and the Bush Barn Art Center/playground. 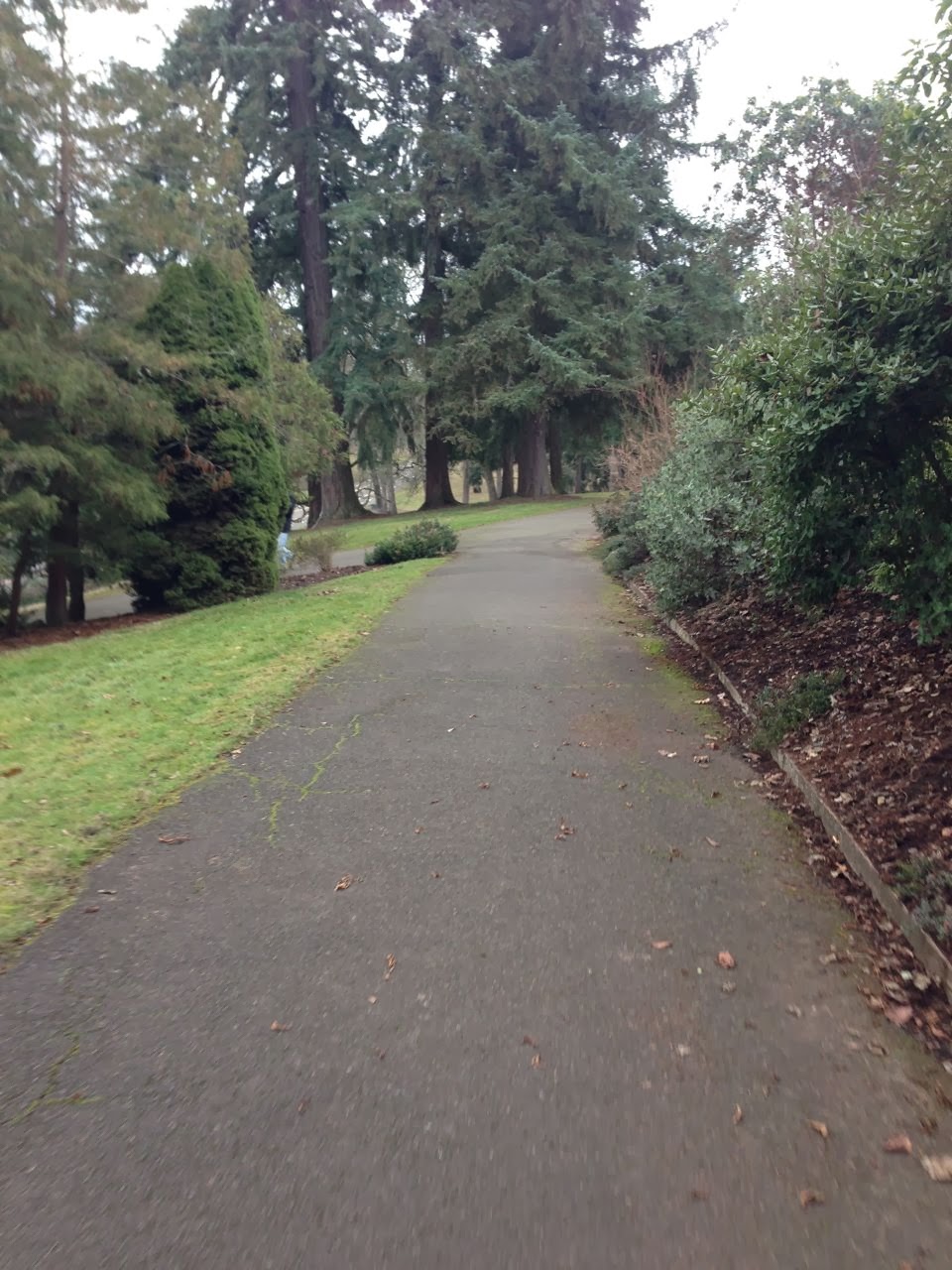 The path is pleasantly wide, and essentially ready for much higher volume of use
than it currently has. 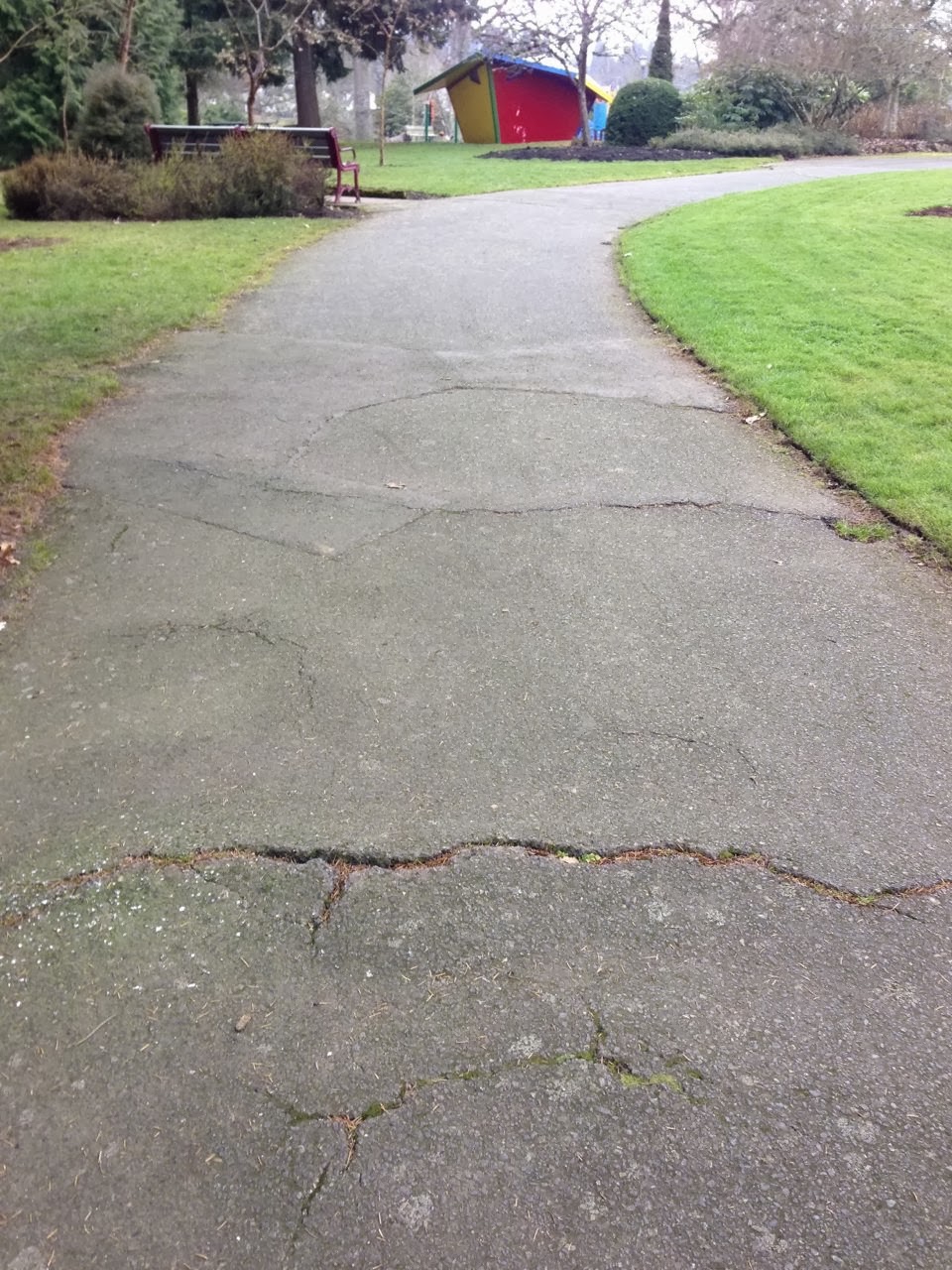 Of course, there are some issues that would need to be dealt with…there is an amazing mini roller-coaster caused by some roots under the part of the path making the turn towards the playground (some simple re-paving might help; signs warning cyclists about the playground would be necessary, too). But it seems--at least on the surface (no pun intended)--like this is a project worth looking into.

With this leg of the path put in place, the connection between the Bush Park neighborhood and points south with Church Street and the downtown core would be much improved. The pedestrian crossing at Mission really has made this a much safer place to cross a dangerous and cycle-unfriendly street. It begs for better connection with the rest of the path network in Bush Park.

The other part of this notion that has some attraction (at least to me) is that putting a cycling path along the old carriageway wouldn't be a radical innovation, but re-purposing something that was historically always there. Some small re-routing would need to take the path from its original course, but I don't think that would detract from the path's viability.

I hope that, somehow, this idea might rise to the level of a priority. It could very much help connect (at fairly low cost) parts of an already-existing pathway system, much to the benefit of an area of Salem with many current (and potential future) users of active transportation to get downtown and back on a daily basis.

So, Santa, would you consider this item for Salem's collective "cycling stocking" next year?