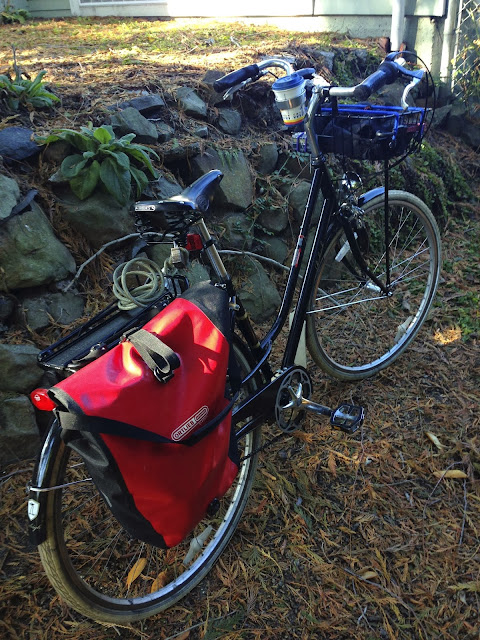 Some months ago, I was asked by a community member just how long I was planning to keep this fairly mundane blog about utility cycling going. My interlocutor was trying to get me to take a more purposeful approach, advocating for some causes in town and perhaps making more of a "statement."

I appreciated his interest and his sense that we all have a rôle to play in improving the community, and I've written a bit here and there about some of the transportation issues around town as I see them. But, at heart, my purpose in Upright Cycling runs in other directions.

Writing a cycling blog is an open invitation to self-importance, I suppose. After all, who would (or should) be interested in reading about the ramblings of a middle-aged cleric in a mid-sized Oregon city on a three-speed bike?

So, the temptation is to try and pack this blog with all sorts of serious-minded, "breaking-news" frippery. I'll admit...this impulse sometimes gets the better of me. But I just can't stay there. It isn't my style.

The real purpose of these writings is a sort of personal chronicle of what it means to view transportation as an interactive experience--connecting with one's own body, nature, physical space, other people, the spiritual life, and the meaning of movement from place-to-place itself.

The "statement" I am making is really more about the potential significance, beauty, and (yikes!) even holiness of the world we encounter every day. Think of it as a sort of spiritualized "small-is-beautiful" journal, with slow upright bikes--if this makes any sense.

In writing these posts, I am inviting readers wherever they are to find their own environment and surroundings anew via "active transportation."

The person asking me about my blog wondered how long I could keep such a humble and rather dull project going. Well, I don't know for sure. But there seems to be an endless stream of discoveries and delights for those open to it. So, here are some of these moments in my travels during recent weeks:

The civic dimension of architecture has long fascinated me. I enjoy cycling in part because of how it puts me in much more direct contact with architecture...good, bad, and (yes) indifferent. I am fascinated by experiencing how buildings connect with the space around them, the people using them, and our civic memory itself. 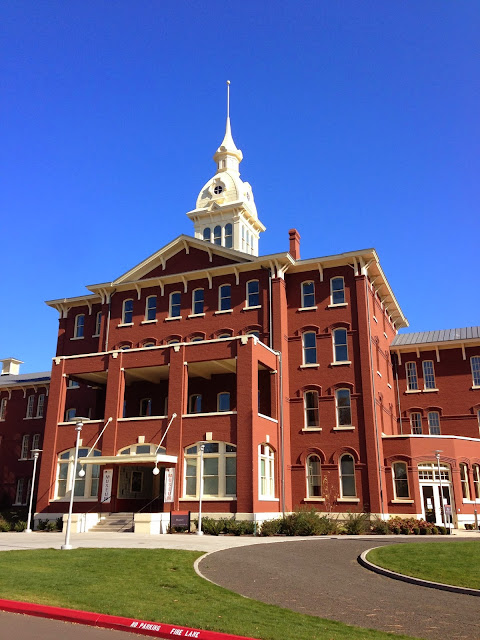 Some buildings, like the old portion of the Oregon State Hospital, proclaim an enormous amount about the confidence of their era, the belief those who built them had in their project, and the degree to which their purpose was understood to be connected with other ages or places. This example points up the often complex stories involved with not only a building, but a movement or an institution.

Then, there are the effects of lighting and weather on familiar structures, suddenly revealed to have new dimensions.

I pass by this brick structure, called The Dome Building, quite regularly. One day I was peddling along towards the crossing on Center Street (tellingly, once called "Asylum Street") when I was struck by the amazing shadows caste by the September afternoon sun. The pattern of surface and void made a sudden impression. 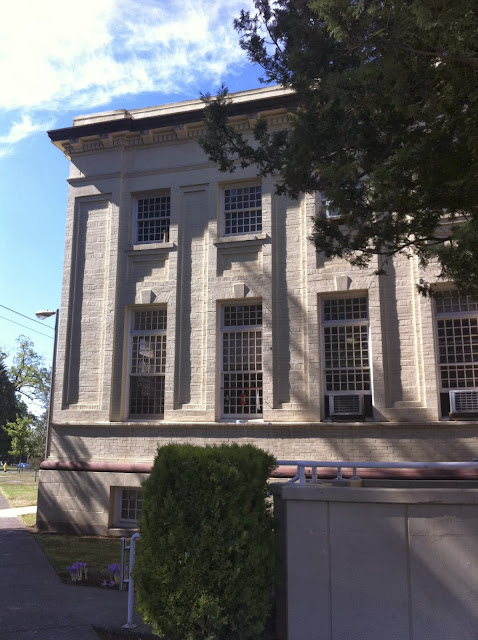 That is an example of the best of such moments. There are others, of course... 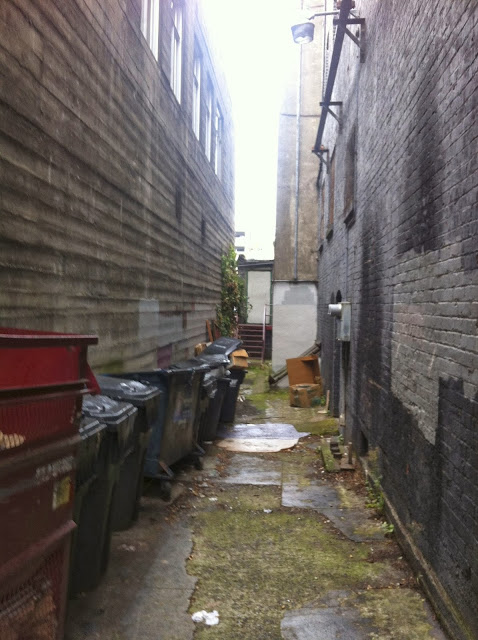 Cycling does reveal the hidden places between architecture...alleys like this one downtown, looking like a close-up of the space between a sugar-junkie's unflossed teeth. These are reminders that everything, and everyone, has a hidden aspect that may belie all the effort put into making the frontage sparkle with up-to-date swank.

When I am out biking I occasionally come upon neat projects that allow people access or service, really improving things. Some of these are recent, others old and perhaps a bit forgotten. Sometimes, it is just an interestingly-themed bike rack, like this one at the Oregon Department of Fish and Wildlife: 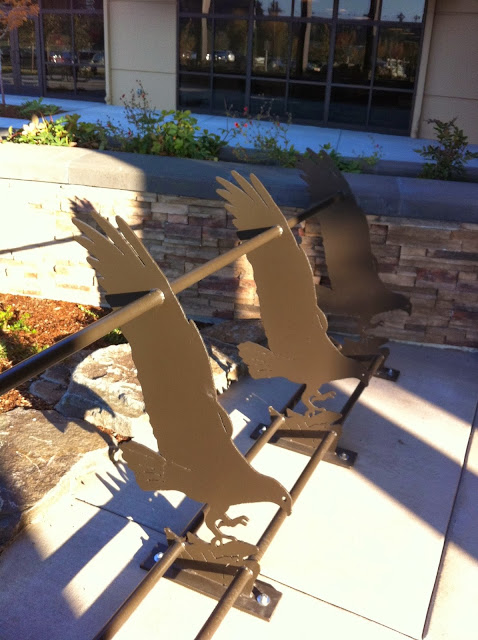 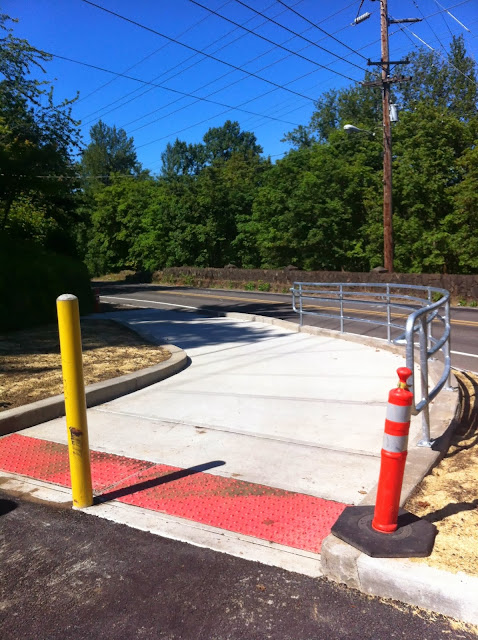 Things like this can restore a bit of confidence in our society, where we are pummeled with bad news, grudges, and endless rehashes of failure.

When I am in my car, I simply don't have the time or opportunity to take in the needs of the environment around me. I am mostly busy with arriving, not the getting there part. When cycling, that changes. I notice things...sometimes really seeing what is reduced to a blur when motoring about. An example would be the concrete wasteland downtown by the old Boise Cascade property between the Willamette River and Commercial street: 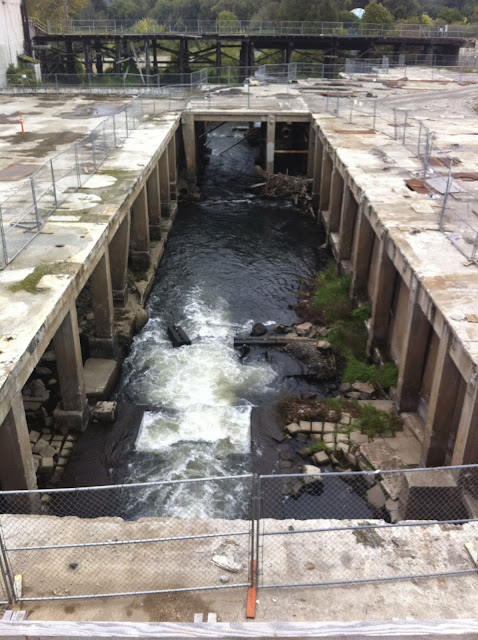 This wasteland is likely to stay here, in much the current shape, until Salem decides to do something about it. It is a kind of mute testimony to all that has been wrong with the Euro-American treatment of nature and the footprint we leave behind when done extracting what we can from it.

Encased in concrete, hampered by creosoted pilings, celebrated as a treasure few blocks East with parks and shoreside paths yet treated as a dump at its mouth, Pringle Creek still arrives at the Willamette here; but what a sorrowful last few yards! 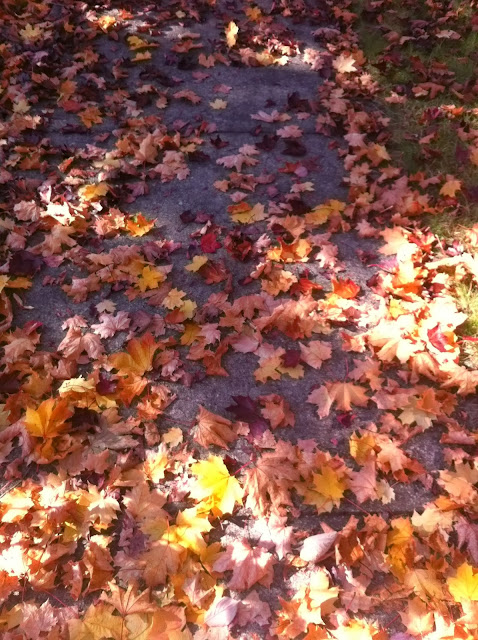 I count on October each year to deliver one of the most delightful sounds I know: the crunch of dry leaves under my bicycle tires. The crisp air, low sun, foggy mornings, extraordinary scents, and carpet of colorful leaves provides a sensory experience second to none in Upright Cycling. When was the last time you took the kid inside you out for a ride? This is the time for it.

I haven't yet figured out what these two-dimensional wolves on the State Hospital grounds are about, but they make an interesting stopping point on my way home. They manage to be whimsical and unsettling, all at once: 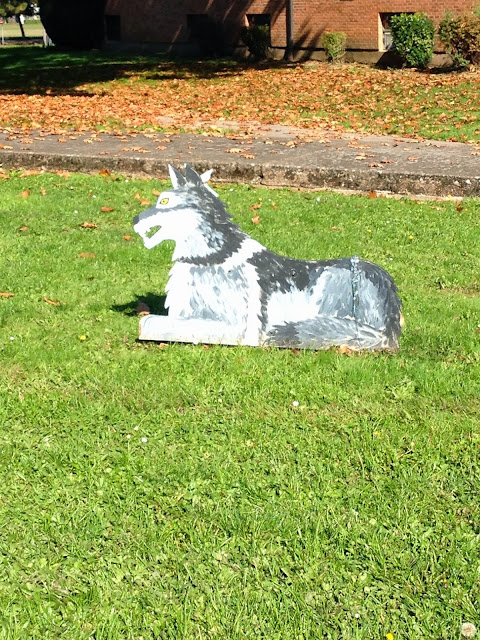 The metal flamingos are quite interesting and attractive, as well: 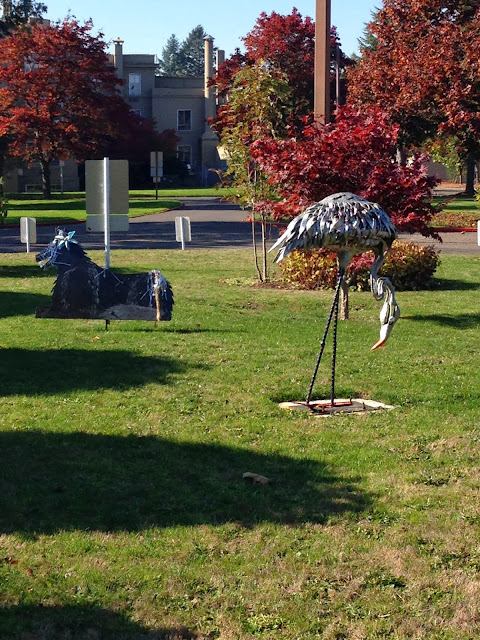 All of this on the grounds of the State Hospital and the Corrections Department's Parole Division: a place many find very painful. With such different associations, I enjoy it. This, too, is an ambivalent fact we must live with.

The bicycle is really a "cycle of nature" itself, as it puts one in such direct contact with the elements. This time of year, that means when I return from an evening Bible study that I am in the dark. Having a great set of lights really does help; but the slightly surreal atmosphere of overhanging branches festooned with bunches of golden and red leaves backlit by the glare of street lamps is utterly different from the daytime scene: 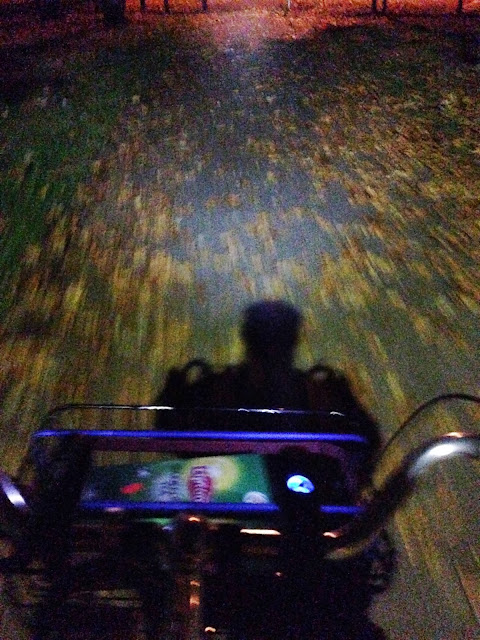 The quiet and peacefulness on a street like this is something I treasure after a long day. Why do we deny ourselves this sort of experience by creating cities, suburbs, and "lifestyles" isolating us in our cars? It is a pity.

The Steel Steed, Itself:

Upright Cycling isn't about the "bling" of bikes; it's about the experience of active transport and what it allows for. In the process utility cycling turns a bicycle from a toy or a sporting good into something akin to an appliance. This is not to say that one is completely unsentimental about one's bike. No, indeed: 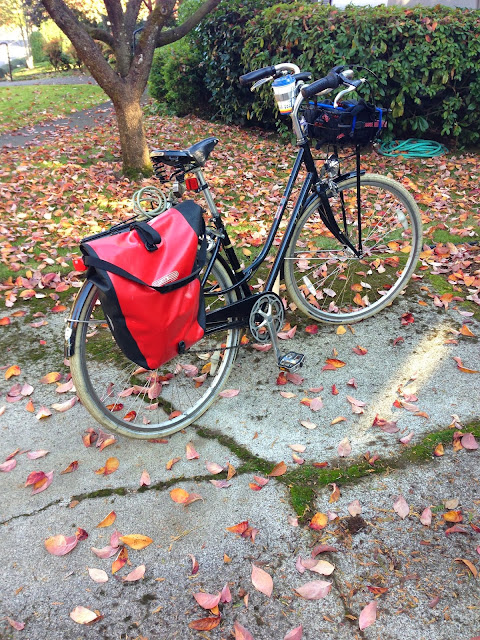 Hugo has been kitted out pretty carefully over the last two years, and is now in fine fettle, though soon to be spattered with the effects of Oregon's rainy season. For now, though, he looks grand against Autumn's fallen leaves.

The relative simplicity of a bicycle, combined with the "sweat equity" of actually making it go, has a great attractiveness to it. The miles I put on my bike feel much more like an investment in transportation and the community through which I pedal than an escape from these things.

Finally, I think one of the effects of utility cycling is an ever-greater appreciation for simple things, such as direct contact with people and the environment in which I live. All of that makes a bike a strangely beautiful utilitarian object to me.

What similar moments have you encountered out there this season? 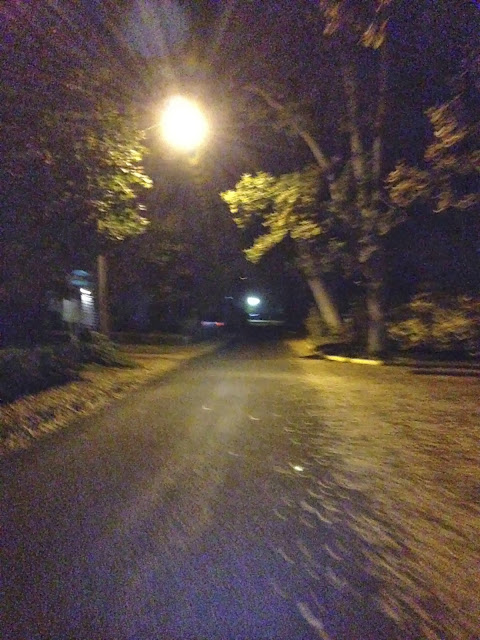 A Foggy Day in Salem Town 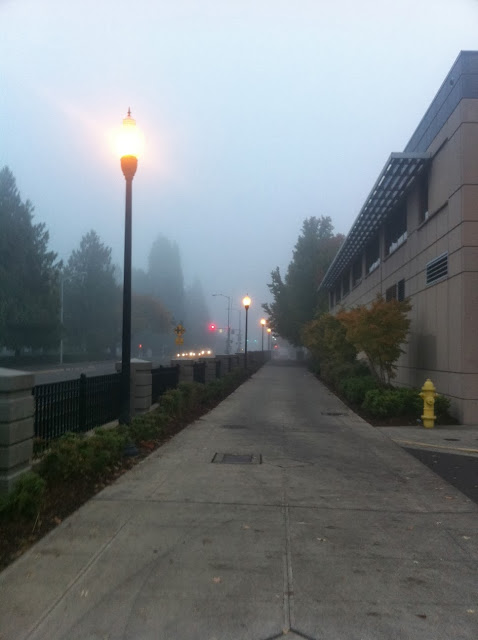 October is a particularly glorious month. In the succession of seasons it draws attention to time's passage and the earth's rhythms in a delightful variety of ways, especially on bicycle.

Like its mid-Spring antipode, October's waning sun provides warmth, but the air is cooler than in September and filled with a constantly-varying succession of very distinct and earthy scents: wood-smoke, leaves, fungus, wet pavement, and pine straw.  Rains have settled the dust, giving trees moisture to put on an even more riotous display of color. The senses are dazzled in a final burst of Summer's energetic momentum.

That added moisture contributes to another aspect of October I find particularly pleasing: fog. My morning journey to church this time of year is often made enveloped in a blanket of innumerable water droplets. They collect on my glasses (somewhat annoying), but mostly they provide an atmosphere of mystery, distorting my experience of space and placing the focus on the near-at-hand. Fog plays wonderfully with light, sound, and perspective, creating dramatic effects in the most mundane places.

Take the 12th Street Promenade, for example. This pathway made necessary by a railroad can become, briefly, a study in flaring lights and muted surfaces--all wrapped in a ghostly silence and stillness. Grey, yellow, orange, brown, blue combine to make an unlikely and evanescent palette worthy of Whistler. The transience of the scene, so often populated by only a handful of people, becomes one more reason to be thankful for the experience.

Cycling through town is thought of as an essentially practical matter of transport; this is obviously true when we speak of motivation. But the aesthetics of the journey, though uneven, are often significant as well. Travel by auto makes it difficult or dangerous to experience this; being on a bicycle encourages it. In turn, such experiences change one's perspective on the familiar...both in term of places and people. The extraordinary and mysterious potential of both is revealed in myriad ways by something so simple as a ride to the office. Because no dollar value can be put on this, it remains lost in the discussions of livability and planning.

However, if I were a wagering man, I would be willing to put money on the proposition that our society would be much happier, content, and forbearing if more of us experienced our cities and towns from the perspective of a bicycle or on foot. It just makes you think--and feel--differently, appreciating what (and who) is always there in a more hopeful way.
Posted by B+ at 10:58 AM No comments: