I've been doing some thinking recently about the 3rd Bridge issue in town. I'm in a bit of a quandary, because there are times when I am in a car and can see the obvious need for more mobility across the Willamette River...especially during rush-hour, when downtown Salem becomes largely immobilized. I've also seen what a traffic accident (or a person threatening to jump off one of the two bridges downtown) can do to our river-straddling city. So, I am not unsympathetic with the issues at hand.

The cost of such projects is immense, as is the investment of land and environments to what turns out to be a fairly imposing and inhospitable piece of infrastructure. It is very easy to think of this latter issue as negligible...until you have to live by one of these enormities. Then it becomes quite significant.

My travels around town by bike often take me by one of the best forecasts of the likely outcome of a major new bridge project in Salem: the Mission Street Viaduct Complex. I call it a "complex" because, if one travels around it as either a pedestrian or by bike, it is quite a large structure, with many component parts that drivers in cars likely miss. 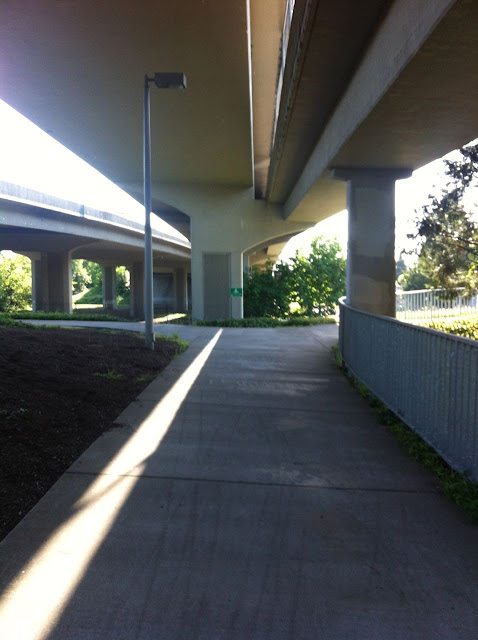 The first picture (above) is taken of the path into the hidden "interchange" area located under the west end of the Mission Street Viaduct. We are looking east. It is attractively landscaped and (to the degree anything is today) designed to appeal to one's eyes. While functional, it is maintained well. A fair amount of the concrete surfaces bear repeated paintings, showing that this is a prime canvas for taggers of various sorts. This immediately makes one aware of something: would one want to be here in the evening or at night?

Many people are going to answer, almost immediately, some form of "heavens, no!" But this is part of the problem with such facilities. They create new spaces that are hidden, "off limits" to many citizens, and an invitation to potential nefarious activities. When such spaces proliferate, they create pockets of instant isolation and decay. They contribute to the breakdown of places that often need all the help they can get to become functional communities.

As one turns the corner on the multiple user path and heads north, this is what greets the eye: more seclusion. 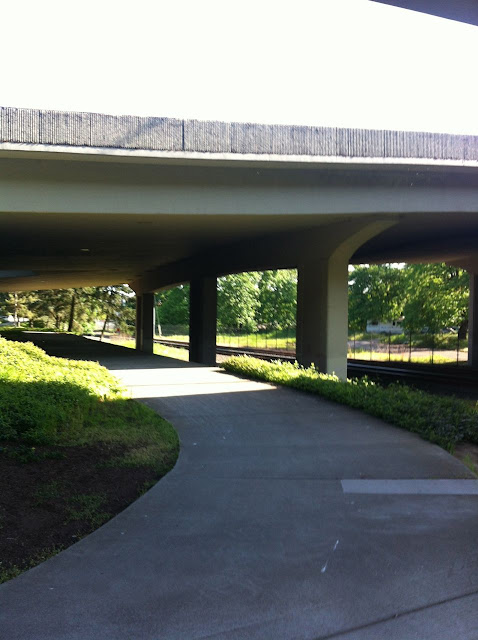 This shady spot would be a nice place to rest on a warm day, or to seek refuge during a rainstorm...but it is also out of view of most people. It is not a place many people would like to be caught...day or night. Is this just middle-class anxiety? I don't think so. In addition to the "no trespassing" signs stenciled on various surfaces (suggesting this has been at least a bit of an issue in the past), there are plenty of signs that various folks have made this at least a temporary shelter recently, and the ever-present graffiti reinforces this impression (again, the city is obviously making efforts to cover it). Lots of potential for problems here, even with the lighting provided. 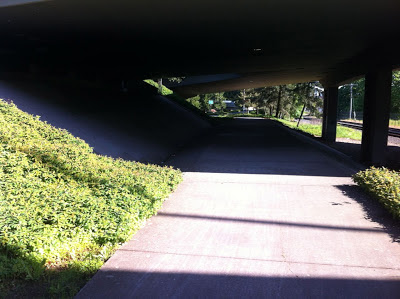 If this were a perfect world, the design of this pedestrian and cycle path would be seen as very practical and thus well-used. The truth is that I rarely see anyone using this facility--except folks who tend to spend a lot of time on the streets in town. They count, too, of course. But the ideal mix of various cyclists, joggers, fitness walkers, commuters, and the like which promotes safety for all just doesn't seem to be happening here. I think the seclusion makes this guaranteed. It also means that all the best efforts to accommodate non-motorized traffic in this project really didn't work and were a sad waste of money and effort.

[Of course, I could be missing a lot of planned-for use that goes on, and if this is so, I will certainly accept the just criticism.] 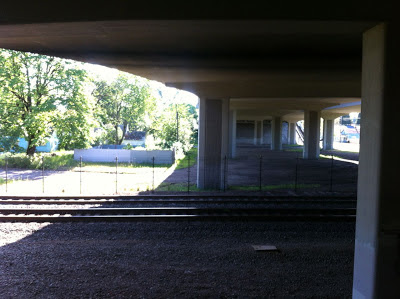 The railroad tracks below the path are the reason for the viaduct in the first place. They are about as attractively-maintained as such things can be...but the environment around this structure encourages a kind of communal vacancy. Property around the viaduct tends to be minimally-maintained, with lots of unattractive fencing (why dress something up if the big concrete neighbor is so coldly mute and bereft of human characteristics?). The number of people who make this (and the nearby stream banks) temporary housing seems to encourage this protective activity by home owners and renters.

The loud clanging of vehicles overhead similarly makes the bridge a place to be avoided for most folks. It is a kind of no-man's land, no matter how hard it tries to present another, more inviting face.

All in all, the viaduct makes what has for some decades been seen as an expendable part of town just that much more so. The wonder was that anyone thought that the pedestrian/cycling accommodations would be widely used. Naïveté? Willful naïveté? Idealism carried to a ludicrous level? Too much effort was expended to dress all of this up to think it was purely a cynical maneuver. It seems to me it was what someone who doesn't do this sort of traveling thought would make sense.


Sadly, the level of security and trust in our city hasn't noticeably increased over the years. People are very conscious of safety. While many want to walk or bike from place to place, complexes such as this one stand as hefty dissuasion from taking up the practice. Like the speedways they support, this sort of infrastructure creates vast moats that isolate regions of town from one another, making places with ongoing problems that much more difficult to improve or connect with other sorts of communities. Isolation rarely makes things better, and that is what such structures enforce in radical ways.

Building a major bridge in another old part of town that has good access to the inner core of Salem makes one wonder about how expendable that neighborhood is understood to be. It also means yet more flat, near-downtown real estate on the old city grid will be lost to us so that cars can get places a bit faster. Once built, it is pretty difficult to undo such projects. 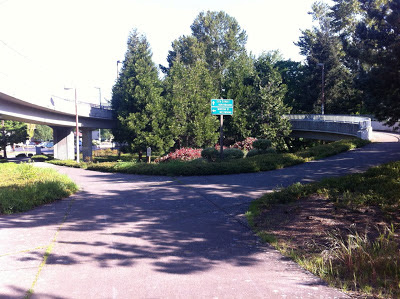 The Mission Street Complex has some interesting notions to it. The above-pictured central interchange is really quite nice. I can almost imagine an ice cream stand open during the summer months, or pedestrian- or cycling-supported coffee spot here. Too bad it isn't used more. Again, safety seems to be the major concern. Getting to this area means traveling on busy streets and then choosing to go out of view to most people. I had been over and around the viaduct by car hundreds of times and never knew this area was here. It might as well be a hundred miles from the nearby auto traffic...except for the roadway sound. 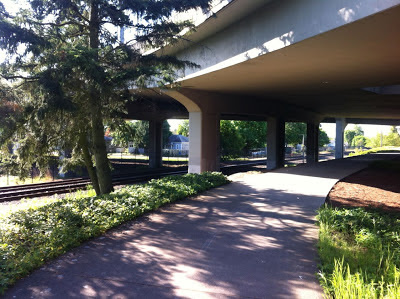 As one heads north, towards 13th Street and the railway station, a look back towards the underpass reminds me that, while a good idea in some ways, this was never a realistic way to encourage foot and cycle traffic. It is just too isolated.

My conclusions? Large traffic infrastructure projects often make promises (express or implied) to the neighborhoods in which they are sited which do not materialize. Something so clearly designed for driver convenience is likely to be blithe about the real needs of pedestrians and cyclists...even if (as in the Mission Street Complex) apparent real effort was put into creating solutions. Neighborhoods that are "chosen" for this treatment likely aren't going to be ones that have much political pull un upper echelons. It is the old, familiar story. Money talks.

If the 3rd bridge (in whatever incarnation) is ever built in Salem, I wonder if a new wasteland (on potentially much more valuable property) is about to be created, and if more unfulfilled gestures will be made to the neighborhoods affected and the other (rising) modes of transportation using it. With driving rates declining and many cities realizing that their historic core is one of their chief assets, I don't think we can continue to pretend such gestures are acceptable.
Posted by B+ at 6:12 PM 2 comments: