October is one of my favorite months. There are years when it seems still part of summer; others when winter is already twisting its fingers around the nights and mornings. Crisp, clear October skies seem particularly able to hold images against them in etched precision. No other month in Western Oregon experiences such an amount of change in temperature or precipitation. October is a month of alteration and energy.

When cycling around Salem this time of year, I am doubly glad I am on my particular kind of bicycle. First of all, it has me in the upright position. I can see around me pretty clearly, and I can notice things that would just wiz by if I were in the lunging/hunching posture that many bikes encourage.

Second, my bike is not built for speed. Between the frame design, its weight, and the gearing, this is not a fast ride. I’m glad for that, especially now. Hugo (as I’ve named him) is a constant encouragement to take time to smell the roses—or other things—along the way. This is of value through the year, but probably in October above all.

Upright cycling requires patience, but even more it benefits from curiosity. Most transportation today is based on the proposition that a person wants to get from A to B in as short a time as possible. I’ll admit, this is generally true for me in my car. But on my bike, I’m quite aware that I’m no speed demon; the focus is on the journey as well as getting there. I like the fact that my bike encourages real enjoyment of this experience, not just more isolation and efficiency.

With October’s weather and changing foliage, a cyclist has a particular engagement with nature. In addition to the sights, there are sounds (leaves crunching or slurping under the wheels), smells (spicy scents of oak leaves, earthy ones of various fungus), and (increasingly) the feel of rain-slicked roads and the crinkly-swooshy sounds of rain gear long stored away in the closet but now packed or worn for the journey.

Below are a few mementos from October Upright Cycling, with the author’s encouragement for you—wherever you are—to take time when possible and soak up the places in which you ride… 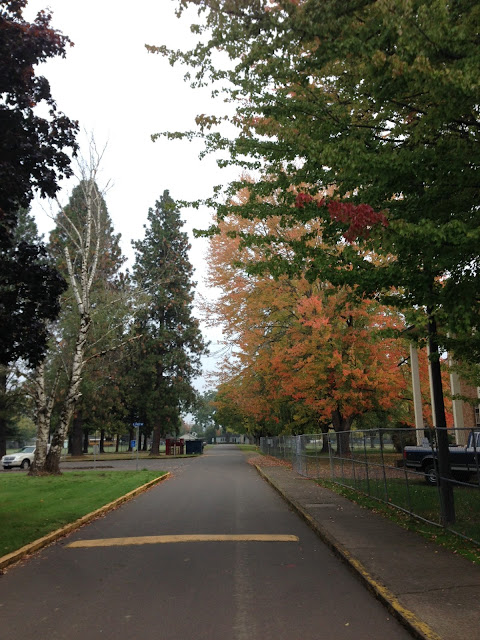 October transforms very ordinary places into amazing showcases of color. The combination of natural variety and human efforts to plant that variety throughout town is highlighted once again. Trees and bushes one passes with barely a thought in the summer are revealed to be extraordinary horticultural fireworks for a brief few weeks; passing by these displays of leafy chromatic pyrotechnics on my bike is my own version of a New England Autumnal Tour. 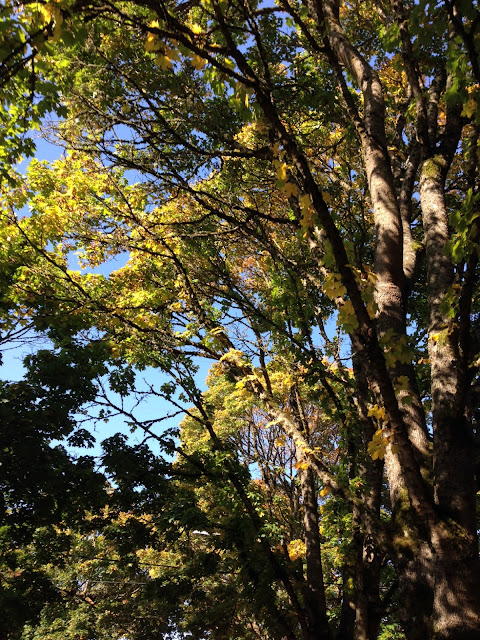 As I trundle along on my bike at its less-than-rapid pace I have time and opportunity to take in the leafy views overhead. Sometimes this is an exercise in shadow, and at others it is a riotous canopy of boughs all competing for light, forming a long arboreal tunnel. Riding underneath these displays is akin to climbing into a Monet painting. 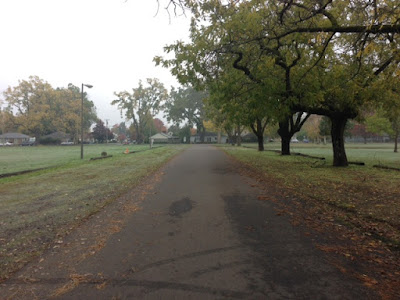 Fall is a season of fruitfulness and beauty, but it also heralds winter. As I pedal through town, what was once lovely and variegated becomes bleak and dank as the season wears on. This sequence becomes much more personal as I bike through it, partaking of the feel, the smell of fall transitioning into winter. A year ago I was in the hospital, preparing for surgery on a disease that had been growing for some years inside me but was unknown to me; the busy hum of life was suddenly rendered a completely different landscape in the blink of an eye. We are so fragile; life is changeable in this sublunary world. I think about these things as I make my way through town as the seasons change. 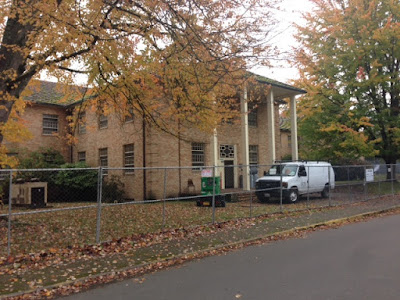 I also pass buildings that tell their own, complex stories. One of them is the former Children’s Unit at the State Hospital. A friend of mine began her career at the State Hospital with a stint in this building, and has told me things so sad I wince just recalling the conversation. This building was closed many years ago, but is now being prepared for demolition. I ride by and wonder at what sorrows took place there, what efforts were made to do something for such wounded humans, or what wrongs may have been perpetrated here. There are so many mysteries and unanswered questions in our lives. It is a regular reminder to pray for those whose pain is hidden from view, but whose sufferings are the most acute. 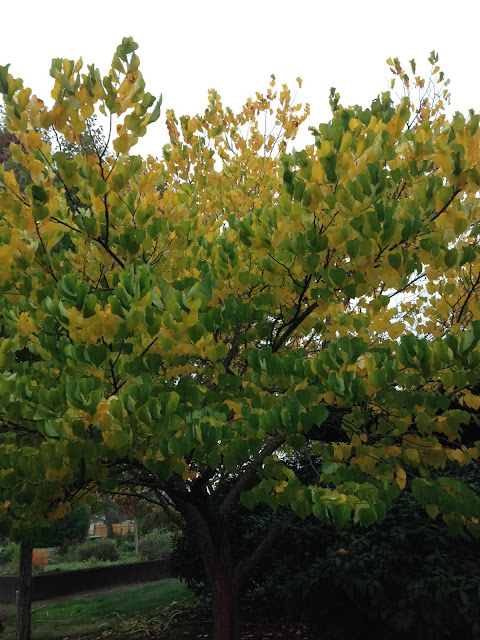 Another pleasure October provides is the sudden illumination of the hidden beauty in the familiar. As I rounded the church grounds a few days back, I came upon this tree, tucked next to what we call the “funeral doors” at our church. This was formerly a main entrance, but an addition in the 1990s changed it into a service entrance and the place where the hearse draws up to the building for funerals. Much of the year it eludes my attention.

This tree puts on a spectacular yellow-and-green display for a short while in October, and I took some time to enjoy it as I swept the walkway and summer’s spider webs by the entrance door.

Death is nothing to be afraid of; mortality is the way of this world; there is so much more to life than avoiding death. Just being here by this tree reaffirms all that. 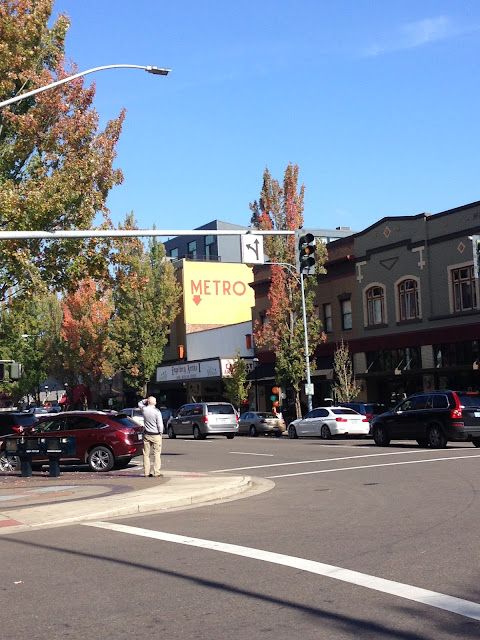 October’s light has a certain clarity and slant combining summer’s intensity with an autumnal crispness of shadow. Add to that the changing colors of street trees, and you have a fleeting but special season. I took this picture as I was picking up something from a local stationery store. The energy and activity going on are frozen into a momentary image. It reminds me (for some reason) of something out of an Edward Hopper painting. Maybe it is that bright yellow square of urban advertising in the middle. As a cyclist, I enjoy the ability to be an observer as well as a participant in the flow of life. I almost never take this point of view when driving. 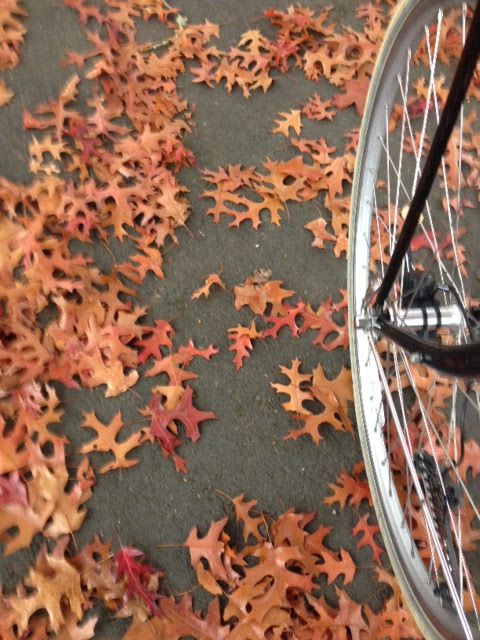 Since I was a kid I’ve always loved the crunch of dry, fallen leaves under my bike tires. I enjoy watching the breeze, like a wave on the beach moving sea foam, lift a multitude of leaves from their temporary resting place and deposit them with a clatter somewhere else. The aural dimension of biking can be one of its more delicate gifts.

At its best, cycling is a very interactive experience and helps to erase some of the distance between modern, technological Homo sapiens and the natural world that produces us. It also brings out the kid in me—something driving doesn’t.

A year after my experience of cancer, surgery, and the beginning of recuperation, I give thanks for the blessing of healing, care, and support. I also give thanks for the simple miracle of being out on my slow, upright bike—taking in the world through the seasons, and especially for October cycling. 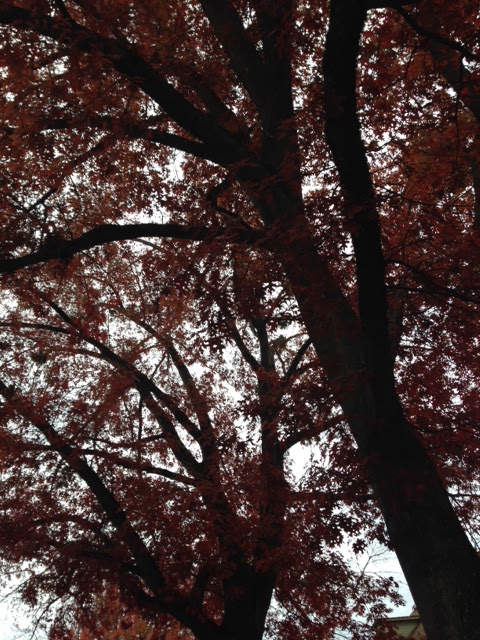