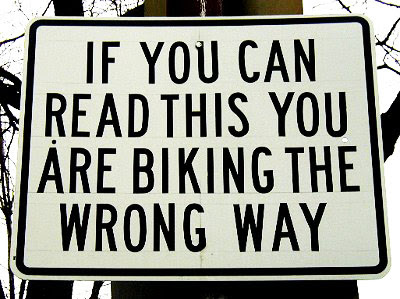 This post is going to be a little crabby.

A few weeks ago I was out cycling in town and had a really poor set of "experiences" with other cyclists.

Before I get going, though, let me first explain an ongoing issue I have about urban utility cycling and its acceptance by the wider American public.

I am generally a common-sense driver and cyclist. I try to obey the law, but recognize that there are times when rigid adherence is unnecessary or even unwise. I try to cut some slack to others, as well, realizing that none of us gets it right all of the time, and (especially when I am in a car) that pushing one's rights too far can easily lead to serious consequences for other road users. I think cutting some slack to cyclists when driving is a good thing, because is is all too easy to seriously injure or even kill someone with a car, less so with a bike.

However, I am pretty frequently, uh, let's say perturbed by many of the cyclists I meet around town. From blatantly disobeying elementary laws (stopping at intersections, especially high-traffic ones) to simple matters of courtesy (lane changes), to pretty obvious things that would preserve personal safety (like salmoning over signs in the bike lane pointing the other way), I witness so many acts of folly, rudeness, and sheer stupidity out there that at times it does get to me. I believe this, in turn, has the effect of helping keep cycling for practical purposes on the margins in our society--the province yahoos, goons, and eggheads.

The case that brought this up for me recently was watching a guy salmoning the wrong way on a one-way street in the bike lane. In addition to scaring various people driving perfectly responsibly or turning onto the street and (quite reasonably) not expecting to see him, he would not move over for me while I was biking along the correct way in that same lane. Fixing his eyes on me, he just smiled as we approached a head-on collision. Somehow, the rules of physics and the space-time continuum were just going to be suspended for him. Or, I could move out of the way into the busy lane of traffic. 'Ah, what the hell!" seemed to sum up his particular creedo.

That same trip, I witnessed a fellow who jetted across the street in the face of oncoming traffic, causing cars to throw on their brakes and endanger everyone (especially me, who could easily have been squashed by a car trying to avoid hitting the cyclist or another car). Lost in his own world of infinite selfishness, the cyclist never registered any sense of the mess he had caused. He just blundered on.

These are but two of the very large number of extremely dangerous and thoughtless actions I witness as I ply my way around town. I hear many motorists speak of the sheer craziness of some of the cyclists out there, and when I drive, I certainly see a lot of it as well. It is easy to join in the criticism...except that I am a cyclist, too.

I have read blog post after blog post saying that cyclists shouldn't have to be concerned with the poor behavior of other cyclists, that we should be judged on a case-by-case basis, and that getting upset about bad cycling is either classist or self-loathingly apologetic. Somehow, the fact that only a minority of people cycle and that what they do out there has a disproportionate effect on how non-cyclists see this form of transportation is subsumed in a miasma of political and ideological clap-trap. To me it is a simple fact that when I see so many cyclists blatantly and dangerously disregarding traffic laws--to the detriment of their own safety as well as others--they are doing none of us peddlers a favor. It encourages the view that driving is safer, wiser, and more responsible. In short: that autos are for adults; bikes are for kids and kooks.

As well as yahoos, there are many good cyclists out there on the streets. There are plenty of bad drivers out there as well, and a surprising number of good ones. However, driving is the vast-majority form of transportation and has little to "prove" to most people. Cycling as a legit form of getting around for ordinary people does, sadly, have something to "prove." It needs to show the world that such an alternative mode of movement is not only good for you, enjoyable, safe, environmentally responsible, and economic; it also must show that a utility cycling culture is one that improves respect for others in a world where there is all too little of that precious commodity.

If it cannot do that, I don't think many of the other benefits make all that much difference.