Last fall I took a slow saunter via bike through one of the alleys downtown here in Salem. I was familiar enough with this alley to know it was of interest, as at some time in the past (I think the early 80’s or so) it received a fairly careful makeover. It serves as an example of the creativity of a particular era of urban planning, one that was occasionally quite lovely and hopeful—especially after the concrete brutalism of the 60’s and 70’s still scarring parts of this city. Some months ago I posted a photo essay of this alley’s first block (south-to-north); this second installment looks at photos of the succeeding block that warm afternoon.

The alley in question (between Liberty and Commercial Streets) serves a wide variety of businesses, offices, and residences. This section begins with State Street, one of the broad, nineteenth century thoroughfares found in Salem’s historic downtown core. 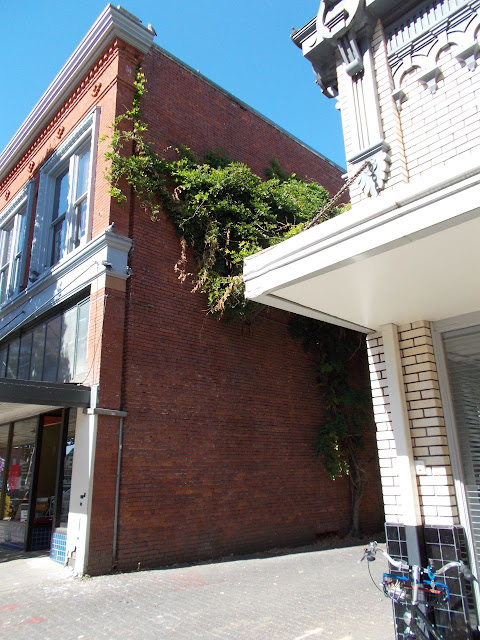 The entrance is framed by a fine Victorian shop-front and a tiled, decorative office building façade (the office of one of Salem’s best known architects, responsible for rather a lot of clearly-identifiable edifices in this burgh). A wide brick expanse greets anyone entering this alley, as does one of the signature elements of this (and the next) block: Japanese Wisteria. 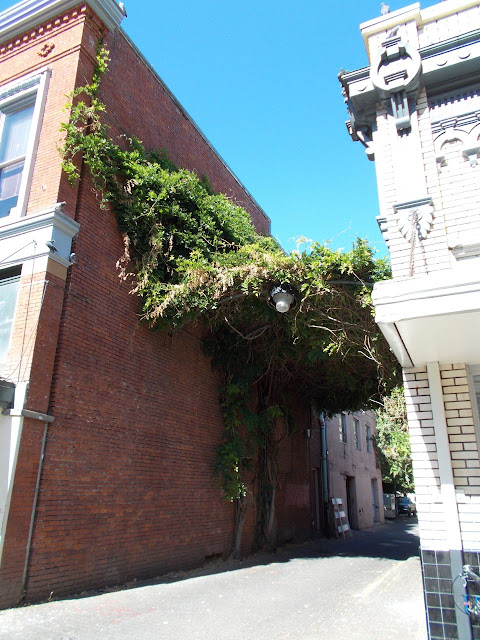 This botanical Triumphal Arch creates a deep bank of foliage that is home to many critters. It softens and cools the entrance to the alley in the summer, perfumes it with thick cascades of flowers in the spring, paints it in warm yellow in fall, and wreathes it in wisps of branch and vine in the winter. 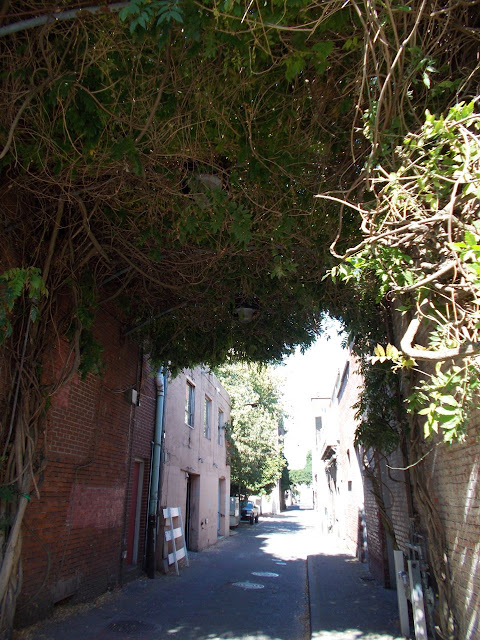 Past the wisteria-arch, we enter into the workaday world of an urban alley: back entrances to businesses, garbage dumpsters, gas and electric meters, and the outdoor storage for what cannot be fit anywhere else. 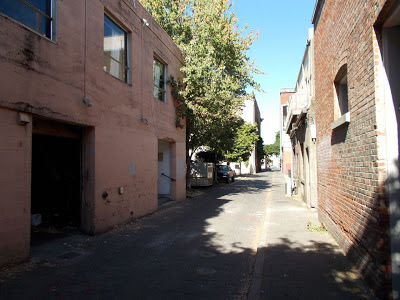 One building has a stucco wall that, perhaps due to the intrusion of moisture, perhaps mirroring the topography of what is underneath, undulates with a wild, Gaudi-esque vibe. Hidden, tired, and rather dusty, its biomorphic waves always charm me when the light hits it at the right angle. 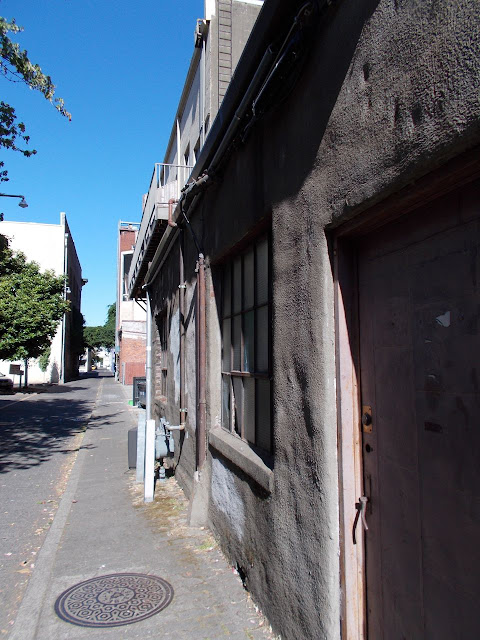 Strewn along the way underfoot one finds a collection of interesting manhole covers:

Here is an old Bell System access point. It presents the viewer with a magnificently detailed geometric pattern, arresting in its control and execution. All that for a non-slip surface! 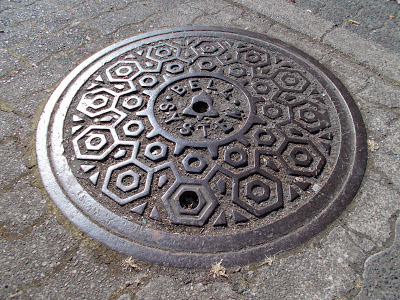 This detail of the cover's center reminds me it wasn’t all that long ago that there was only one “Phone Company” in every town, and that the Bell System trademark was ubiquitous. It meant “telephone.” It all seems closer to Alexander Graham than it does to Steve Jobs now—though it really isn’t. 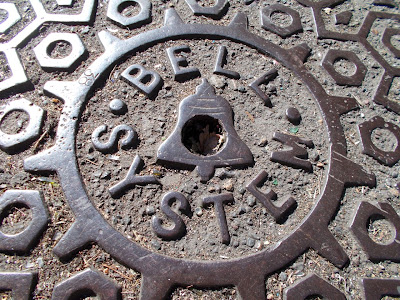 Another manhole cover presents concentric circles, emblazoned with the manufacturer’s name and the City of Salem’s ownership, indicating that it provides access to city services, I suppose.

Another cover shows a grid-like pattern, filled here with the crumbled detritus of dried autumn leaves. It proudly announces its provenance, as well. Such care taken with utterly utilitarian things!

Looking up now, one spots a rooster. Yes, that’s right—a rooster. It is ceramic, but a rooster nonetheless, perched on the balcony of a newly-renovated downtown apartment building. I look forward to this whimsical accent whenever I pass through. I very much like the way residences are finding their place back downtown. 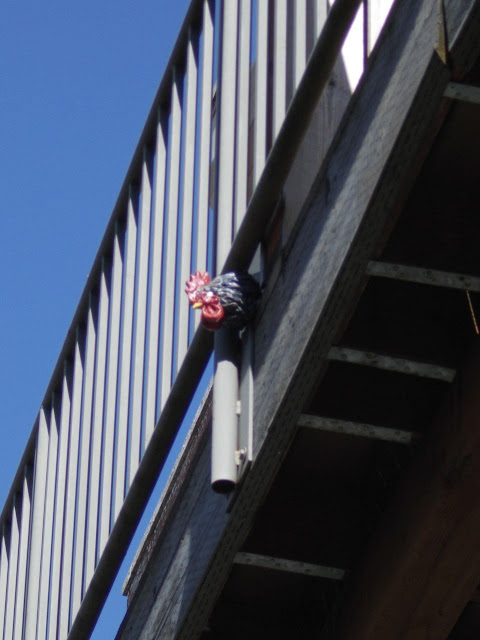 Next door to the “roosterage” is the back of another commercial/apartment building. It, too, has been nicely restored, presenting a large expanse of clean, re-pointed bricklaying. It makes one think about what it must be like to live in the middle of so much activity and noise. The brick walls must help. 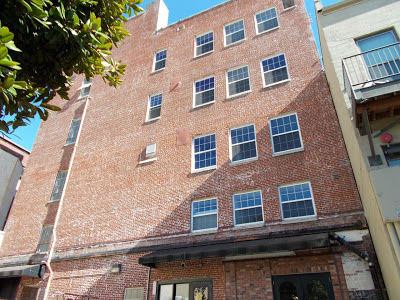 A yoga studio inhabits part of the first floor of this building, and apparently one enters by the alley—one of a number of such public connections between the main streets and the alley. A very fancy chromed bike rack has been placed by the entrance, complete with an artistic (though now rather altered) welded-chain sign reading “Yoga,” making one a bit concerned about parking her for any other purpose. 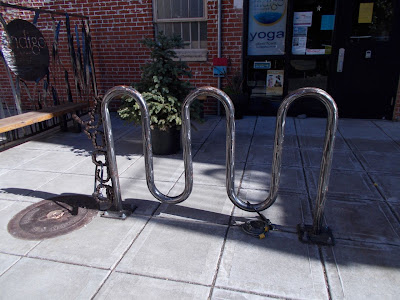 Further on one reaches an expanse of wall largely covered in gas pipes, electrical conduit, and ventilation piping. With shadows cast by the afternoon sun, it takes on a downscale chiaroscuro I find rather pleasing. 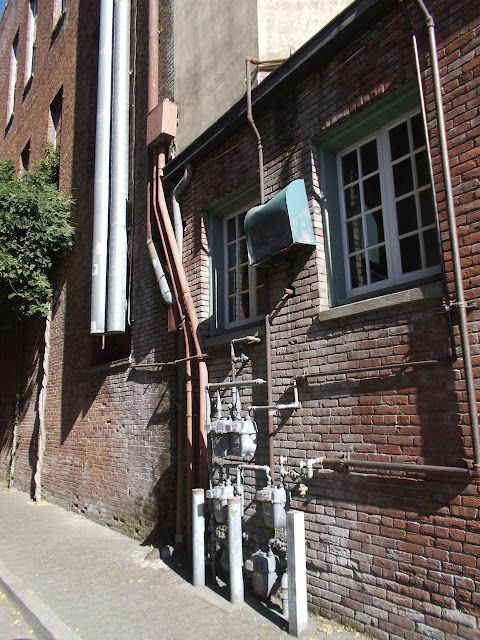 The ventilation pipes (stovepipes?) here are really quite something. They have to travel up a long distance to discharge whatever it is they carry, creating an effect reminiscent (to me) of the precisionist paintings of someone like Sheeler. I find this particular view rather mesmerizing. 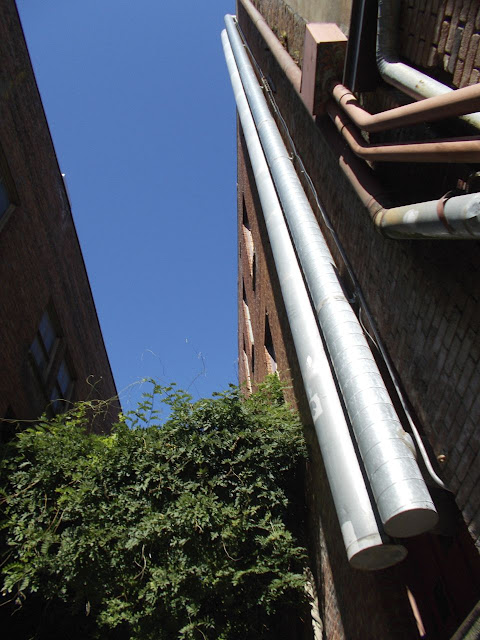 This block of the alley ends with a spectacular display of wisteria again, creating another triumphal arch leading us into Court Street. When I pass through this I am always taken back briefly to a visit I made to Paris when in my teens. I remember slipping from a busy street into the courtyard of a sumptuous art nouveau apartment complex via a short alley hung with similar vines. That is a nice memory to have, even if this isn’t Paris, and there isn’t a trickling fountain in an octagonal courtyard anywhere nearby. 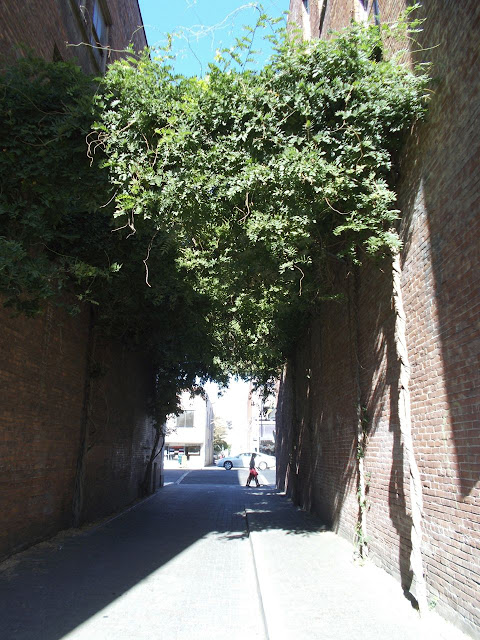 Wisteria is a tenacious plant, and its vines convey that. Here one climes a pole to reach its destination (can wisteria ever be said to have reached its destination, I wonder?). In so doing, it forms Bernini-like columns of life-conveying fiber— perhaps Bernini got the idea from such plants? 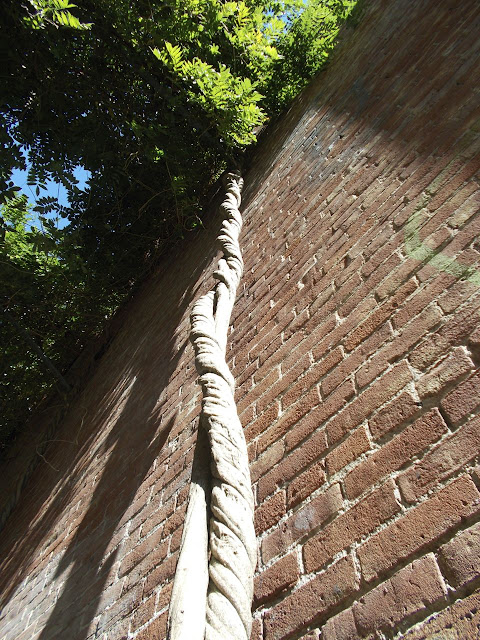 The last stop on this block is the entrance to Court Street, where the alley’s asphalt reaches the pavers marking a crosswalk (not a cross-drive, as the sign to the right makes clear); the awnings of the Reed Opera House stretch out to meet the street and the alley emerges once more into the world it serves. 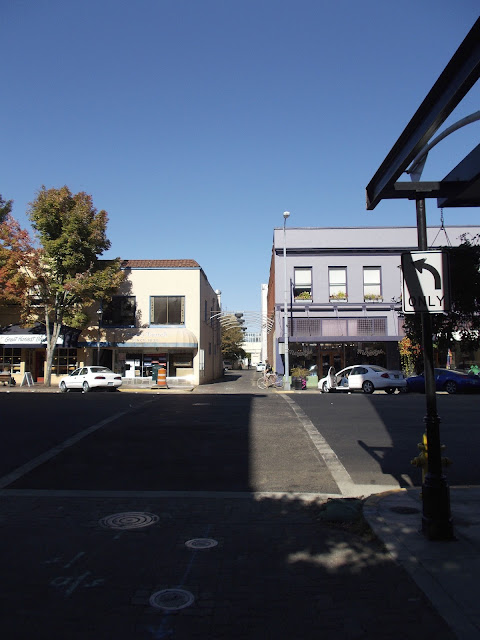 While this block doesn’t have much public art (as did the last one), or a heavily-developed “theme,” its unity is provided by the wisteria, where on a warm day the pigeons gather to be fed by passers-by in its cooling shadows. That's enough of a theme for the birds...and for me.

Enjoy the hidden blessings of life! 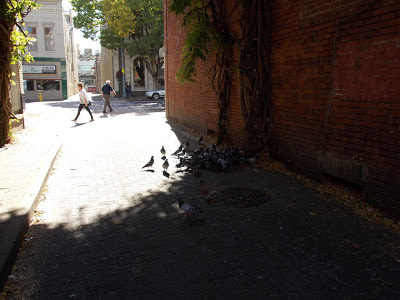 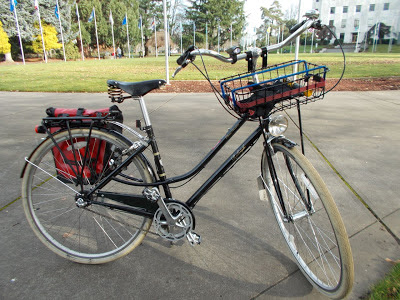 Midwinter spring is its own seasonSempiternal though sodden towards sundown,Suspended in time, between pole and tropic.


From "Little Gidding," in the
Four Quartets; T.S. Eliot

February in Oregon's Willamette Valley is often a time of graceful waiting. It is poised between the cold, wet of early winter and the blustery, gradually warmer rains of spring.  Many years there are long stretches of sun, softened by morning mists, warming the chilled and dull earth with wan rays of promises to be delivered on months later. But promises are often enough to pull one through dark times; and so it is with February's "midwinter spring."

Cycling this time of year has its rewards. Sunlight dries out the roads, making it all less dank and cheering the heart. The early morning cold gets less chilling. The fragrance of wood smoke from the glowing hearths one passes is pungent with memories of childhood firesides and winters long ago, but in later February this is often laced with the powerful aroma of daphne, rolling down into the street and drifting along in colorless clouded-- sometimes for a block or more when the air is just right.


The promise of a season of sun and warmth does indeed run deep on a sunny February day: but we know better. We have much to go through before we arrive at that oasis of calm, gathered around the chiminea late at night and watching sparks fly up towards the stars as we sip a glass of something aged and smooth.

Eliot asks later in this poem "Where now is the 'zero summer?'" Aye, where is it? Far away, we must conclude. The long nights make that evident.

But summer is not quite "unimaginable," as the poem has it. On a day like this, as I pedal  my way by the Capitol's limp flags, warmed by the rising angle of sun once more, I can imagine it...indeed.
Posted by B+ at 4:02 PM No comments: