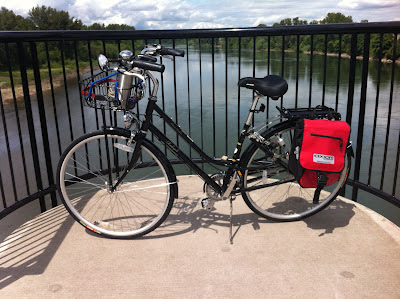 Well, they do say that change is the only constant in this life....

My return to regular urban utility cycling coincided, nearly, with my '63 Raleigh Sports beginning to have some serious problems with the left crank and the spindle in the bottom bracket. Coupled with the poor braking capability (nearly nonexistent in the rain, which does tend to be an issue in these parts), it was getting to be time look to something else. The parts in question are often difficult to find and increasingly expensive...though I am on the look-out for them if you hear of anything!

I had the opportunity to see and ride a splendidly-equipped Dutch bike and immediately took to its fully-upright riding position, as well as its solid construction and excellent components for all-weather cycling. At first all was delightful. Then, gradually, it became clear that my knees are more "English" than "Dutch." The slack seat tube angle on the Dutch bike meant that I could not get up out of the saddle to "pump" when taking off or going uphill, and in general I found that this position was not agreeing with my legs. I tried many different suggestions to remedy the problem, but what made the issue clear was that when I got back on my old Raleigh (after what turned out to be some temporary repairs), the problem went away. Hmmmm.

So, after much consternation, I learned how to use Craigslist and sold my still very new Gazelle. In the meantime, I read about and tested some bikes with the geometry I had learned was more to my liking. I learned a lot. There are a great many options out there now, and it gets a bit overwhelming after a while. But, when it came right down to it, I was looking for something that rode like my old Raleigh.

Eventually, I decided to go to the Raleigh web site and see what they were producing. I had heard that after a time in the bicycle "wilderness," this firm was making good bikes again...though pretty different critters from those with which I was familiar once upon a time. I clicked around their catalog and then suddenly came upon it: their relatively new three speed Classic Roadster. Good heavens.

There it was: an updated version of good ol' Walter (my old Sports). My street testing had shown me that I would never want to go back to a derailleur system for in-town biking. The Raleigh was a three-speed (not Sturmey-Archer anymore...but Shimano's system gets good reviews). The handlebars and riding position puts one pretty upright...even more so than the Sports did, really. The bike came with a decent chain guard (I do miss the full chain case on the Gazelle, though) and fenders (I'm making some mud flaps for them, as they are a bit short). Best of all, the new version has brakes that really work. Jalapeño! This model year one of the colors was a nice glossy black (perfect for a clergyman), and the whole package came in at 31 pounds -- that's about twenty pounds lighter than my Dutch bike. Raleigh had also changed the gearing from the old days, making the entire thing geared down a bit...which is nice for the type of biking I do. All-in-all, I had to test-ride one.

This meant a trip out of town. The cyclery I went to in Portland had one. Using a free afternoon, my wife and I journeyed up to the Metropolis and test rode it. I'll write more about this later. Suffice it to say I was very pleased with it. I was prepared to leave it up there and journey home, considering it all. But, my kind spouse asked me my review: I said it seemed ideal. She said: "Then let's buy it." So, we did.

I've been out on it as much as my travel schedule and needs permit, and I must say that it seems just right.

The reason for this post is not just to tell people that a fairly poky middle-aged guy has purchased a new bike. It is to remind myself and anyone happening on this blog that sometimes we make mistakes in our bicycles. Things don't always work out as planned...and that this can be correctable and result in both some useful learning and some insight. My Dutch bike was "top of the line" in most respects. My new Raleigh is a good bike, but not nearly as luxury. It is, however, probably more in line with my needs and my particular build. While not as fancy, it is more practical. I'm simply not that fancy a person. To have stayed with the Gazelle would have been more about pride than practicality--and that is not what the life I'm committed to is about. Change was needed and accepted. That's a truth applicable to everything in life.

I have not yet named my new "steel steed," but am thinking about it. Until then, I'm plying the streets of our town on the Next Generation of Three Speed human-powered transport, and my knees are much happier. 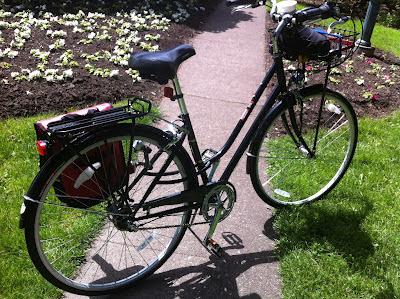