The Hidden Meanings in Campaign Signs

It is City Council campaign season once again in our neighborhood, and the signs for candidates are sprouting like dandelions. Neighbors about whom one usually knows only what their glass recycling bin reveals suddenly share their political and social views with comparative abandon. Amongst a pretty tight-lipped lot, it is a period of unusual openness.

But, what do these signs really tell us?

I think political signs often send unintended messages, and it is those messages I most enjoy. Whether there is any factual basis to the insights below is utterly irrelevant: indeed, in this utterly irrelevant post I rather hope my comments have nothing to do at all with what was intended. Instead, I am trying to draw out deep-seated archetypes from the land of Ur that no-one wanted or thought of. That way, I can get some enjoyment out of all this politicking, as well.

So, here goes some symbolic sleuthing, with tongue placed firmly in cheek: 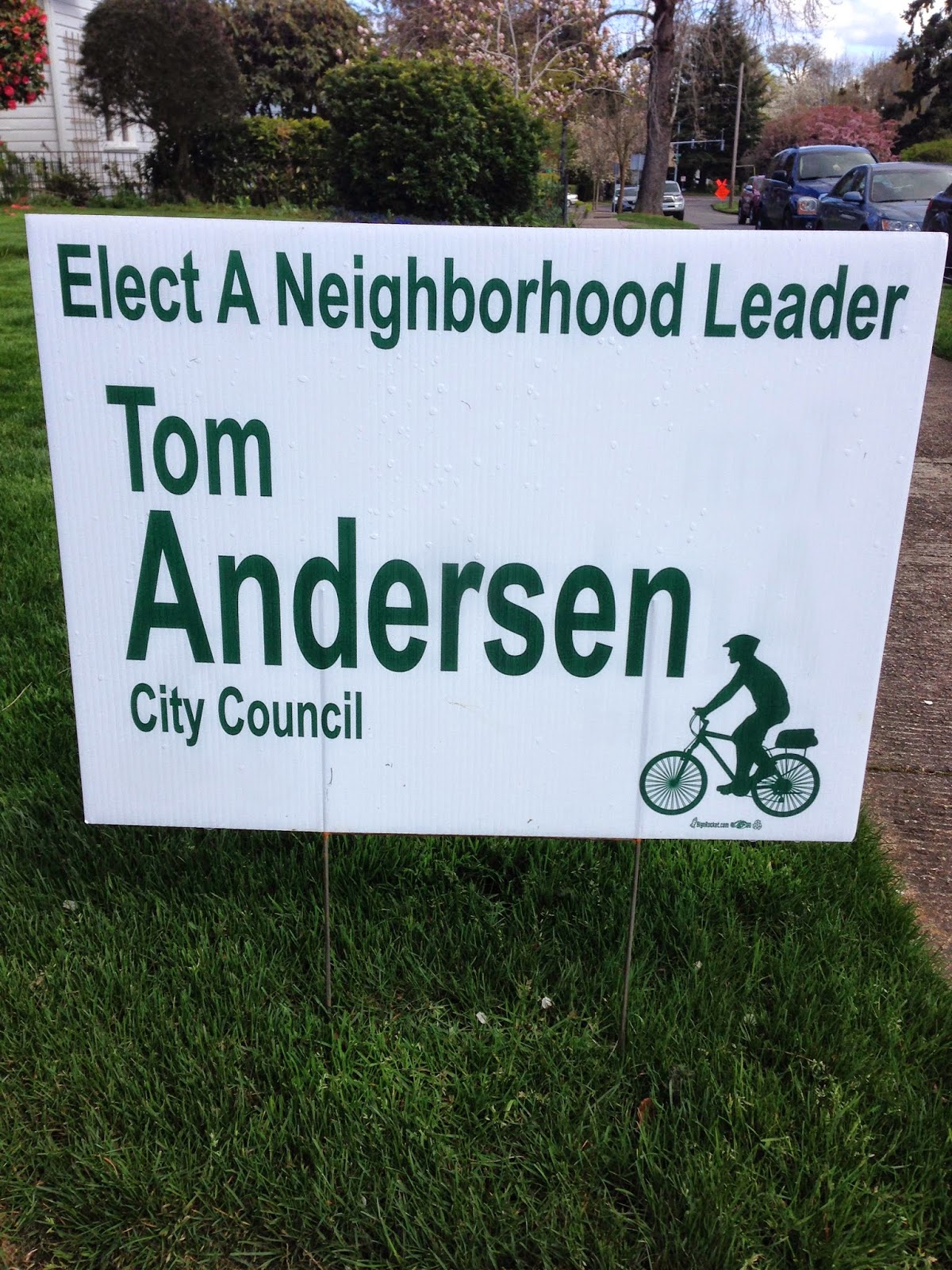 Mr. Andersen's sign is a cunning piece of carefully-concieved electioneering, all right. His use of a white background suggests that either Salem or his constituency is a kind of tabula rasa (a fancy way of saying a "blank slate"). Yet--and here's the beauty of it--he uses the color green for the printing, inferring he is the "green" candidate, without actually saying so. Gerhard Baumschneider, the noted German campaign sign theorist and author of Will to Power: Creating Overwhelming Posters and Signs that Crush the Opposition in Attractive Ways, remarks (on page 83) that: "Green is the color of totalitarian opposition that appears as conformist rhetoric, therefore undetectable and thus most dangerous of all: it cannot fail to attract." The combination of white with green is, accordingly, a profound meditation on the utter vacuity of our life today while at the same time filling that vacuum with hopes for both environmental responsibility and cartloads of money. Very subtle, I say. 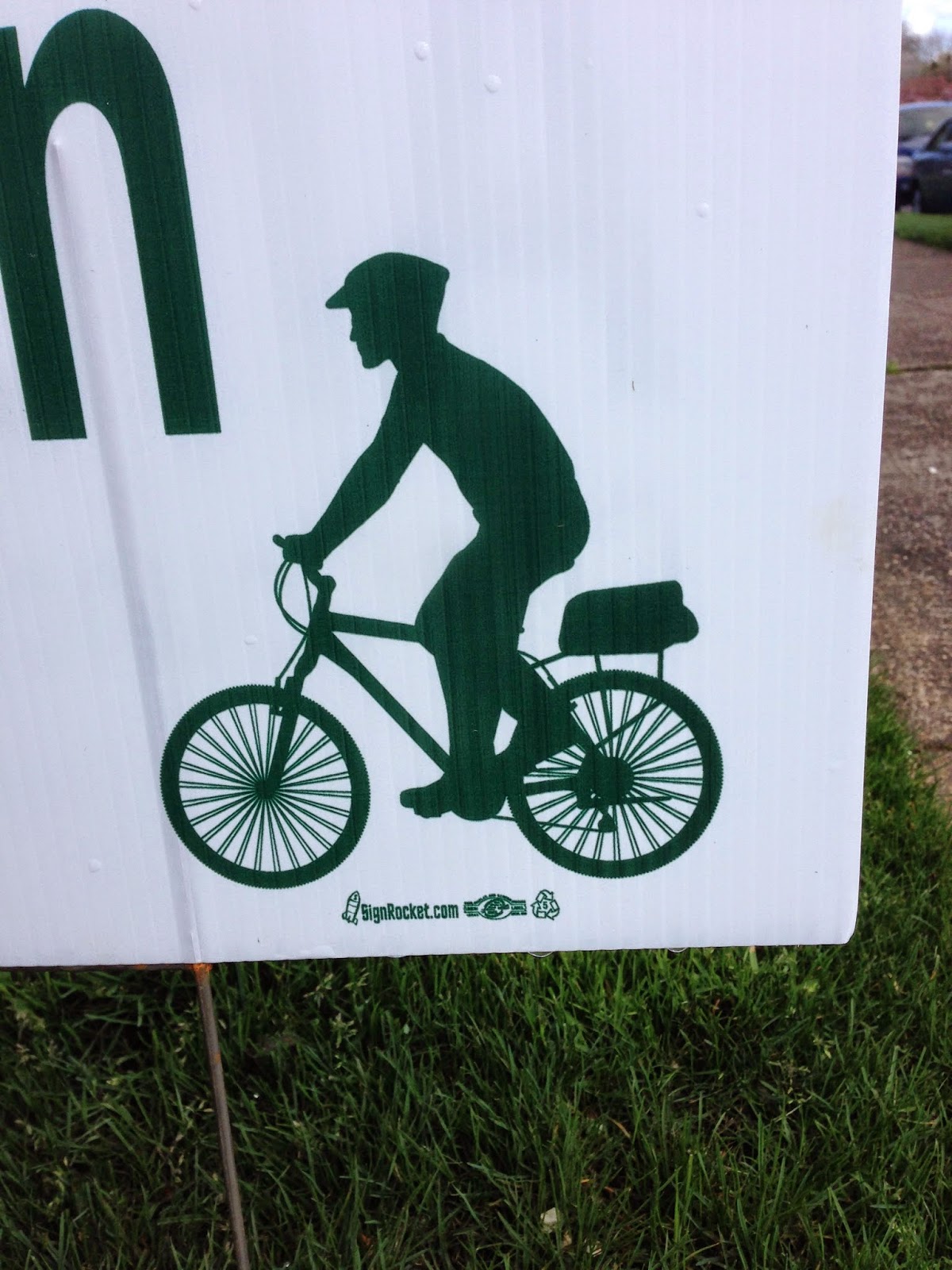 The symbol Mr. Andersen has chosen is a bicycle surmounted by a carefully-rendered rider. Here, the candidate is courting danger. First of all, the rider seems likely to be male. This is just a bad idea, as the "Male Cyclist" trope is one of the oldest in the book, extremely provocative in a district dominated by female cyclists who know how to use the mail-in ballot! Pedal carefully, Mr. Andersen!

Then there is the unclear headgear. Is that a helmet the cyclist is wearing? Or, perhaps it is a worker's cap? If the latter, it's a neat nod to the shrinking Leninist segment in this part of town. If the former, the anti-helmet lobby is going to be enflamed…and they form a large portion of the non-voting base in Salem. That would be one big block to consider. What do non-voting blocks do when angered? Vote! That's what they do. Watch out!

Another point to consider with this "bike-friendly image" is that it is a mountain bike style frame. This seems to be a pitch to the relaxed-yet-not-past-it crowd, and that might prove extremely effective, if the number of people wearing Dockers here is any indication. But, the suspicious spoke pattern in the wheels leads one to conclude Mr. Andersen or the artist haven't seen too many bicycles lately. That pattern went out--or never came in--years ago. Also, I just can't help wondering where the fenders are on this bike? It really does rain here a lot. Does Mr. Andersen know this? Is he truly from here? And, hey…where's your light, man? Well, I better stop here. I don't want to be accused of getting caught up in minutia!

All-in-all, I think the bicycle thing is a good idea; it comes close to sealing the deal for me as a cyclist (and was the inspiration for this post, if you can call it inspired). However, I cannot help but wonder about what is in that pack over the rear wheel? Is that the rider's lunch, or is it the proverbial "bag of dirty tricks" so commonly read about in politics? Time alone can tell. 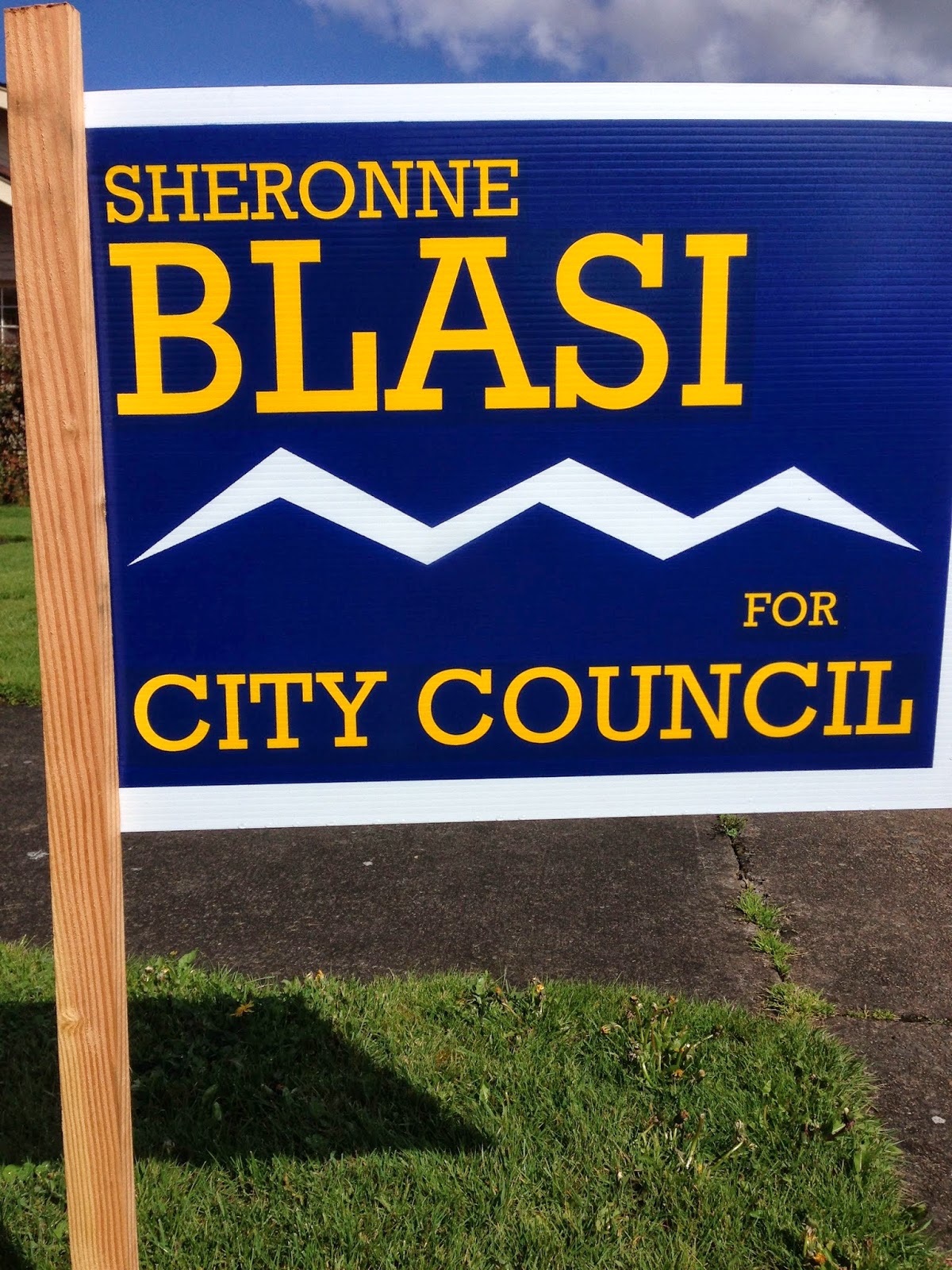 Ms. Blasi's yard sign starts right out by saying: "I'm different and proud of it…but I hope you don't mind too much, because it wasn't meant to offend." I like that, as long as she doesn't get too smug about it. This is a sign that simultaneously comforts and commands. Pretty sneaky.

Using the combination of deep blue with gold is an open invitation for comparison to the Cub Scouts, whose city-wide torchlight parades in the 1950's will never be forgotten. Who could fail to remember the singing of such anthems as "The Green Latrine," "Meadow Muffin Blues," or the immortal "The Cub Scouts Went Over the Mountain," all in 4-part harmony (with descant on the final verse), as the phalanx of eager youngsters swelled over the verge of Gaity Hill, faces aglow and neckerchiefs akimbo, making their way to the Bush Park Assembly Grounds? This careful allusion to a long-ago and far-away Salem was both brilliantly arcane and tellingly emotive. Surely, this is the candidate promising a return to former glory! 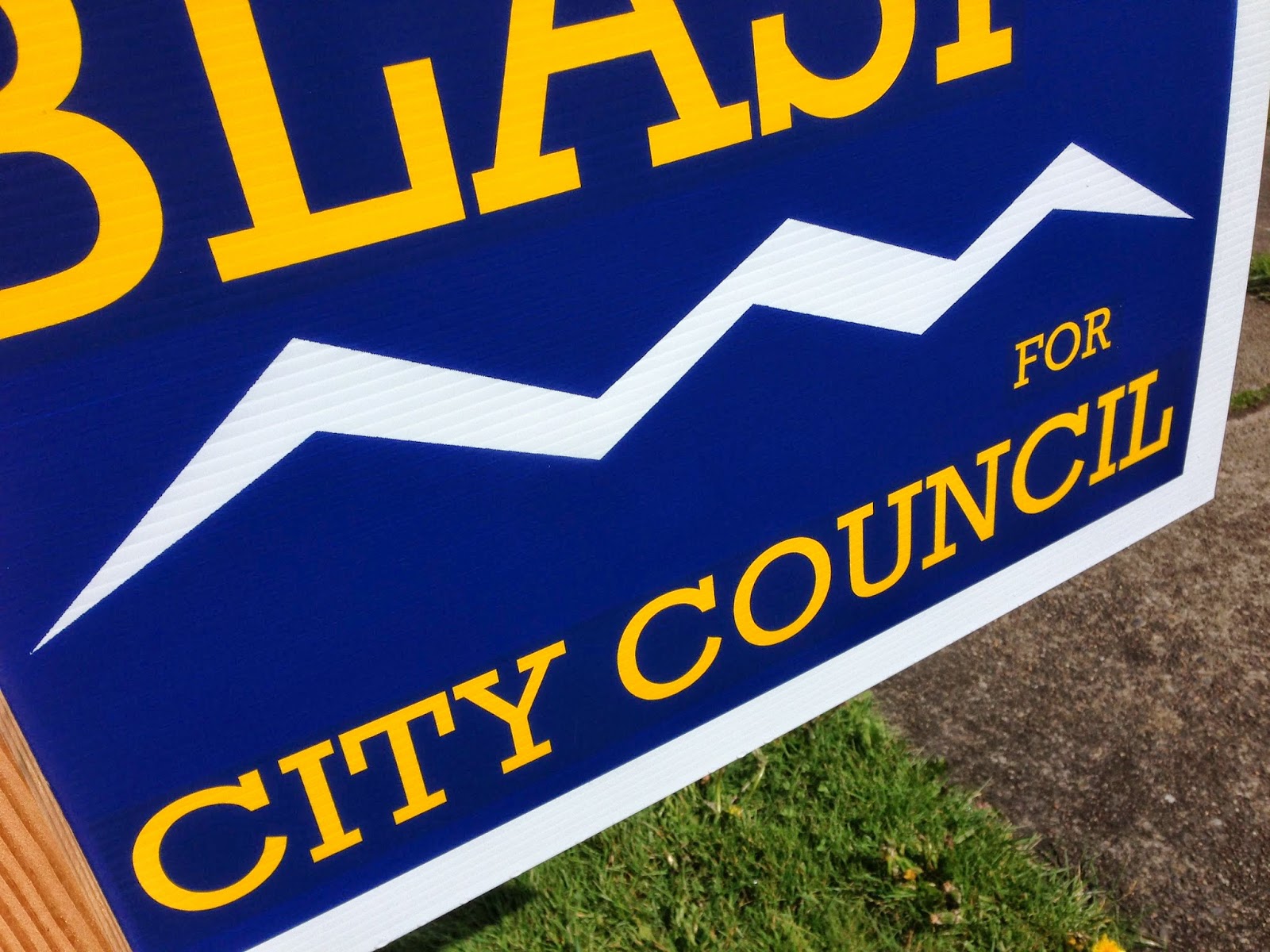 The symbol Ms. Blasi uses for her sign is perhaps the most mysterious and profound of the lot. What is it? A stylized mountain range? Perhaps, perhaps; some folks in this neighborhood do have nice views of the mountains…but not everyone does, and that might be a sore point to bring up. Maybe what she is alluding to is that she has a tough mountain to climb in the election process…and when you consider the signs she has to contend with, I can understand this interpretation. The wooden stake (unique amongst the competition), could be construed as another "back-to-nature" symbol, further differentiating this candidate from her competitors whose metal-framed signs suggest rigid adherence to industrialized sanctimoniousness in a sea of emotional austerity. The People demand more, and Ms. Blasi is promising to deliver it!

Yet, it could be that this is no symbolic mountain range at all, but the grimace on a jack-o'-lantern, or the seismic fault line between Salem's population and the current City Council, or a Cubist "snake-in-the-grass" intimation about the way absolute power corrupts absolutely (see Lord Acton). That would explain the blue, as well: Does Salem suffer from the "blues," and will Ms. Blasi (whose name, after all, means "Blasi" in Italian) shake up and/or bring life to the venomous and necrotic (or pumpkin-like) condition of the Council Chamber? Either way, this is a symbol of contention masquerading as quiescence…I think. Ms. Blasi is a candidate to watch. 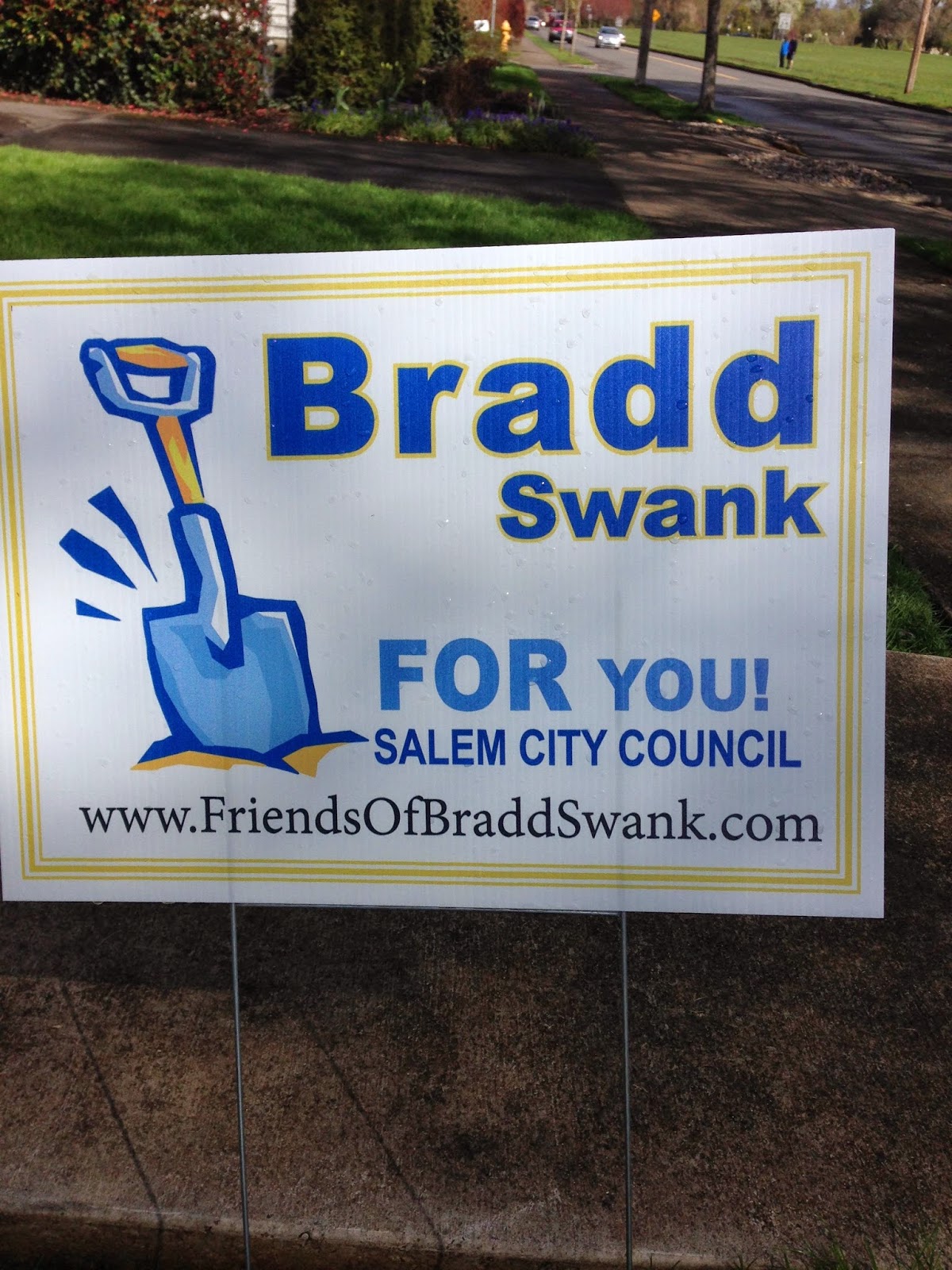 Of all the signs available for inspection so far, this one takes the cake for being a technical tour de force. There it is: not just two colors, or three…but perhaps six! And a shovel! And formal gold edging! Gad!

Mr. Swank's sign is a heavy-hitter in every way: it presents his name in a manner sure to appeal to the libertarian in all Oregonians. That extra "d" in "Bradd" is an unfailing signal to the potential voter that this candidate cannot be bought. "Swank" is not a name likely to go down well with the homespun crowd in this part of town, accustomed as they are to shopping only the sales at Trader Joe's, but the font size ratio between first and last names reminds us that Mr. Swank is all about being Bradd, not Swank. And like the soothing blues and yellows of this sign, that is very reassuring in unsettled times such as these.

This sign also slyly intimates something about the candidate that will likely have an impact on many younger voters: Bradd has friends…and they are online. None of the other signs mention even one friend of the candidate, neither do they seem even to know that there is an Internet. You want to elect people who don't have friends? Who still use a land line? Well, good luck with that! Yet this sign delivers the goods in both friendship and technology departments. Why, Bradd's friends even have made a nice web site you can visit to get to know him personally. One can imagine what his friends would say if asked: "Oh, Bradd didn't want us to do this; he really resisted it…he is such a private guy and a renowned hermit-poet type, but we kept saying to him 'hey, Bradd, we're your friends, we really want this for you! Please, please, let us construct a web site for you!'" And he said, "Well, maybe, just this once; but don't have it play silly music when you open it, please?!" And, lo, it came to pass. Point goes to Mr. Swank and his many friends.

But then we come to the symbol chosen to drive home this candidate's message. And this is where things get complicated: 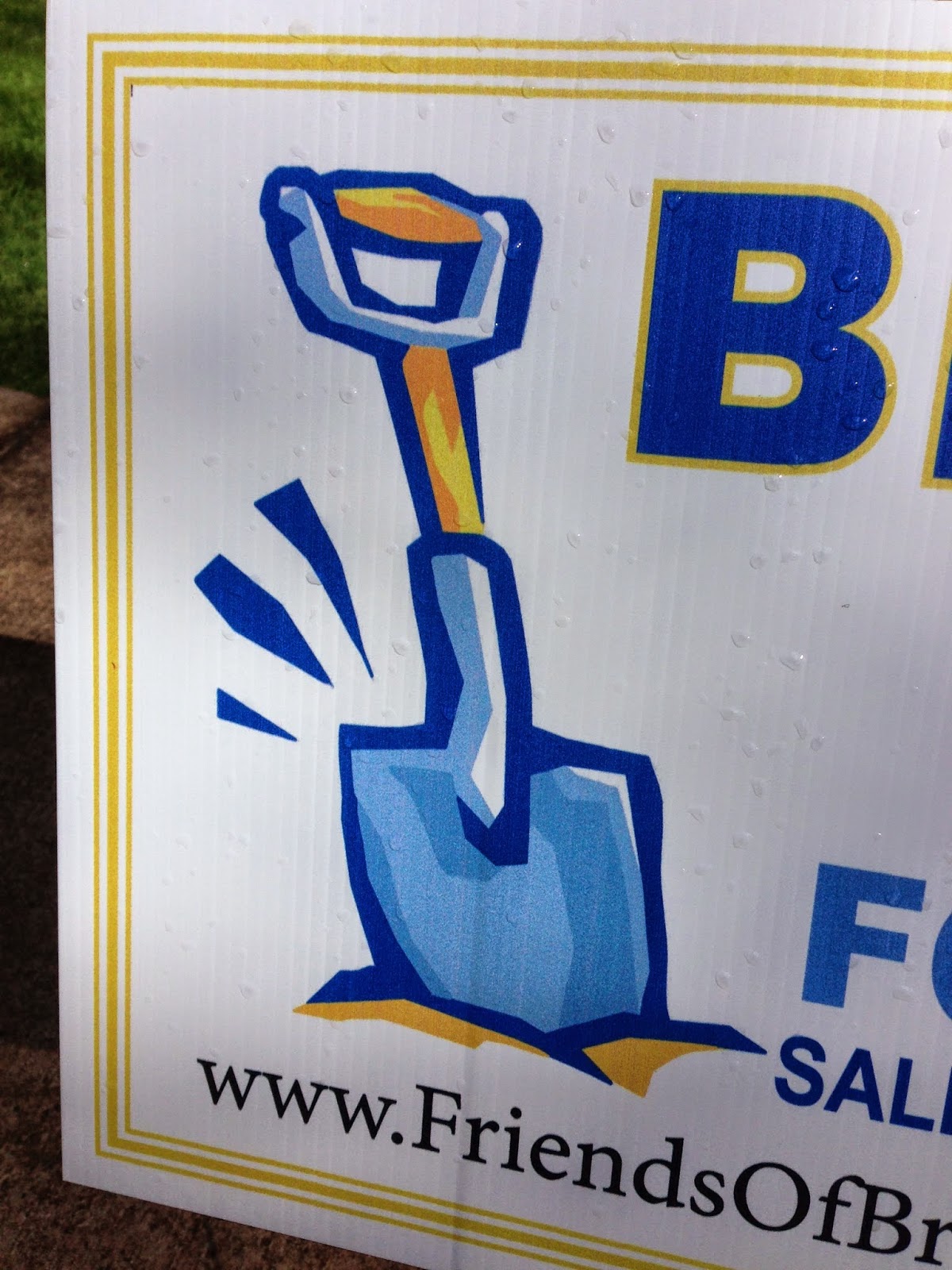 A shovel. That's the symbol. No…that's not it. It is a shovel conveying an emotion with those three little lines. But what emotion? Is that a "Go, Bradd, Go!" or is that a shriek as the shovel is planted into the virgin soil of the Salem Riverfront? (Say…is there any virgin soil down there, anyway?) Well, in any case, this is a loaded symbol, or potentially loaded, if the shovel gets in any deeper. Shovels have a way of being used to change things…and that's when the trouble starts. All that emotion in this sign points to an agenda of action. I hope Mr. Swank knows what he is doing.

All-in-all, Mr. Swank's sign is a masterful exercise in Realpolitik, as Bismarck understood it. Having made a bid for the Youth Vote, he then immediately goes after cynical older voters. With language about Mr. Swank being "FOR you!" one is left with the sneaking suspicion that "someone" is AGAINST you (us). And that means you (we) need to use the rebus-like symbolic shovel to go digging around for where the bodies are buried. You (we) get the idea.... This is skullduggery (ahem!), implied or real, hearkening back to Nikita Khruschev's great shoveling masterstroke: "We will bury you (us)!"

Well, that's about all I can mine from these signs. There may be more there, but having consulted all my remaining notes from college, I'm fresh out of ideas. I like each of them, really, and I'm thinking of filling out my ballot with votes for each candidate, just to be on the safe side. If any other candidates get in the act over the coming weeks, I sure hope they put as much thought into their symbolism. We need something to hold our attention between foreclosure notices and visits from various magazine-sellers and religious entrepreneurs in the neighborhood