Today I experienced one of the fairly frequent hazards of utility cycling in a country where two-wheeled traffic is more of a curiosity or a nuisance than a standard practice. 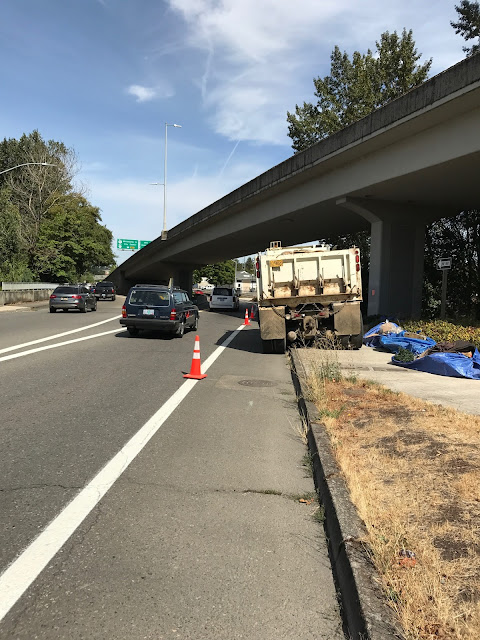 As I trundled along 13th Street near the Railway Station, I suddenly came upon a dump truck parked on the sidewalk/parking strip and in the bike lane. Cones were neatly deployed--as scripture says "righteousness was fulfilled."

However, the fact was that the crew enjoying their lunch had set up a difficult and sudden obstacle course requiring I get into traffic in a place where vehicles are usually barreling along at a good clip. There was no way I could get on the sidewalk. So, I waited in the bike lane until a pause in the traffic and then made my way around the crew's temporary HQ.

I don't begrudge workers the space needed to do their work. What I do think is appropriate would be a sign well in advance advising cyclists take another route (15th street?), or at least that bicycles would be on the roadway. I believe that is the usual practice. As it was, cars and bikes alike came upon the closed bike lane very quickly. It was a rather dangerous situation on a major traffic artery. 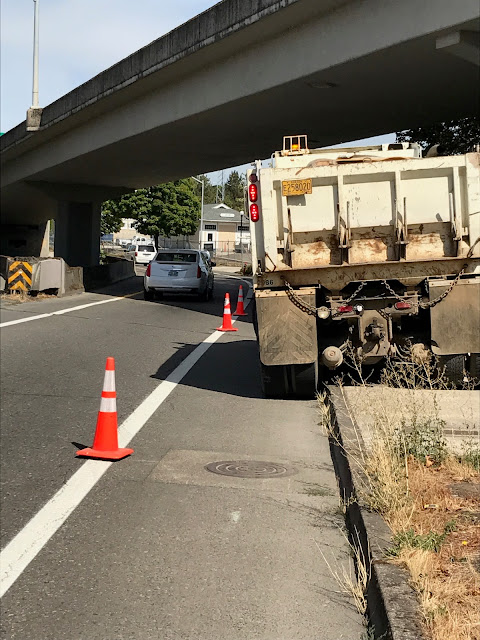 This location has been the site of a number of problems caused by maintenance and construction over the years. The end of the current Greyhound depot/parking construction program will make some difference, but most of my difficulties here have been with city maintenance crews who are in a tight space but fail to give adequate notice to cyclists about the lane being closed.

This is yet another example of why many people who might try utility cycling don't do it: it is simply too dangerous. A separate cycle track would be much better than making cars and bikes share a right of way. Bike lanes are often, to my mind, testimony to our society's lack of vision about how to support and encourage active transportation. For many people (especially parents with children), bikes will remain toys or sports equipment until cars and bikes are separated. The risks (and the noise) are just too high.

I generally use this section of 13th on Sunday mornings as I make may way to church; I'll have to re-commit to avoiding this area during other times, even if it does shave off a few minutes compared to other routes. No sense in having it shave of my head, as well.
Posted by B+ at 6:02 PM